Navalny urges Russians from jail to overcome their fear 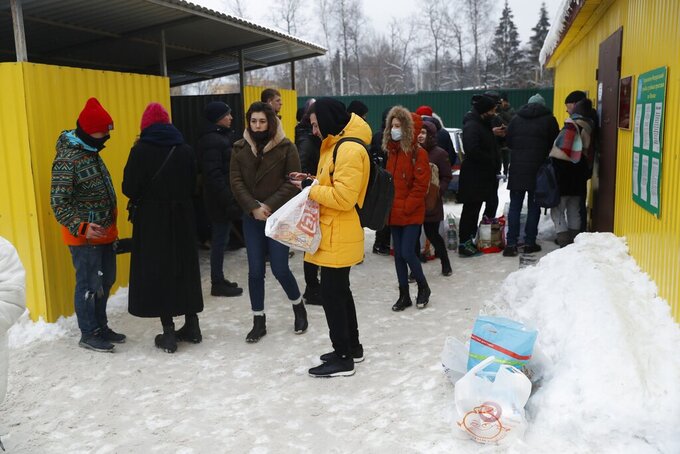 Relatives and friends of jailed protesters wait to transfer food and warm clothes at the deportation centre Sakharovo, 70km (43,7 miles) south-west of Moscow which was urgently transformed into a detention center in the absence of prison space where she has spent 3 days outside Moscow, Russia, Wednesday, Feb. 3, 2021. (AP Photo/Pavel Golovkin)

MOSCOW (AP) — In a note from jail, opposition leader Alexei Navalny urged Russians Thursday to overcome their fear and “free” the country from a “bunch of thieves,” while the Kremlin cast the arrests of thousands of protesters as a due response to the unsanctioned rallies.

Navalny, who was sentenced to two years and eight months in prison earlier this week, said in a statement posted on his Instagram account that “iron doors slammed behind my back with a deafening sound, but I feel like a free man. Because I feel confident I'm right. Thanks to your support. Thanks to my family's support."

Navalny, 44, an anti-corruption campaigner who is Russian President Vladimir Putin’s most determined political foe, was arrested Jan. 17 upon returning from his five-month convalescence in Germany from a nerve agent poisoning, which he has blamed on the Kremlin. Russian authorities deny any involvement and claim they have no proof that he was poisoned despite tests by several European labs.

A Moscow court on Tuesday sent Navalny to prison, finding that he violated the terms of his probation while recuperating in Germany. The sentence stems from a 2014 embezzlement conviction that Navalny has rejected as fabricated and the European Court of Human Rights has ruled unlawful.

He said his imprisonment was “Putin's personal revenge" for surviving and exposing the assassination plot.

“But even more than that, it's a message from Putin and his friends to the entire country: ‘Did you see what we can do? We spit on laws and steamroll anyone who dares to challenge us. We are the law.’”

Protests against Navalny’s arrest and jailing have spread across Russia’s 11 time zones over the past two weekends, drawing tens of thousands in the largest show of discontent with Putin’s rule in years.

In a no-holds-barred response to the protest, police arrested over 10,000 protest participants across Russia and beat scores, according to arrest-monitoring group OVD-Info. Many detainees spent hours packed into police buses after detention facilities in Moscow and St. Petersburg quickly ran out of space. After a long wait, they were crammed into overcrowded jail cells with no precautions to prevent them from being infected with the coronavirus.

Some of the detainees said their cells lacked beds and they had to sleep on the floor, while others complained there weren’t enough beds and inmates took turns to get a nap.

Speaking in a live YouTube broadcast, Leonid Volkov, Navalny’s chief strategist who is currently residing abroad, said the protests should pause until the spring after reaching a peak. He said that protesters won a “huge moral victory” and argued that trying to maintain rallies each weekend would only lead to thousands more arrests and wear participants out.

Instead, he urged supporters to focus on challenging Kremlin candidates in September’s parliamentary elections and securing new Western sanctions against Russia to press for Navalny’s release. He said Navalny's team would try to make sure that “every world leader would discuss nothing but Navalny's release with Putin.”

Hours later, President Joe Biden made his first public comment on the matter, saying “Mr. Navalny, like all Russian citizens, is entitled to his rights under the Russian constitution. He’s been targeted, targeted for exposing corruption. He should be released immediately and without condition.”

Putin spokesman Dmitry Peskov said that Russia won’t listen to Western criticism of Navalny’s sentencing and the police action against protesters. “We aren’t going to take into account such statements regarding the enforcement of our laws on those who violate them and Russian court verdicts,” Peskov said.

He shrugged off questions about detainees waiting for many hours on police buses and being squeezed into cramped cells by saying they had themselves to blame. “The situation wasn’t provoked by law enforcement. It was provoked by participants in unsanctioned actions,” Peskov said during a call with reporters.

One detainee, 30-year-old architect Almir Shamasov, who spent 10 days in a detention facility in Sakharovo outside Moscow, said he spent 20 hours in a police van that either was flooded with fumes or shivering cold when the engine was cut off.

“When you sit inside a police van with engine and heat on, the smell of gas or diesel fuel is unbearable. When it’s off, the steam comes out of your mouth,” he said after being freed late Wednesday.

Another detainee, Eva Sokolova said after walking out of detention in Sakharovo that she slept two nights on the floor of a police precinct before the court jailed her for three days.

About 150 relatives of the detainees waited outside in the snow for many hours Wednesday to hand over food and necessities. One of them, Tatiana Yastrebova, said she waited six hours for officials to accept some items she brought for her son.

Following Navalny's arrest, authorities also moved swiftly to silence and isolate his allies. Last week, a Moscow court put his brother, Oleg, top associate Lyubov Sobol, and several others under house arrest — without access to the internet — for two months as part of a criminal probe into alleged violations of coronavirus restrictions during protests. Sobol was formally charged Thursday with inciting the violation of sanitary regulations by organizing protests.

Navalny has another court hearing scheduled for Friday in Moscow on separate charges of slandering a World War II veteran. He has rejected the case as the Kremlin enacting political revenge.

Navalny argued that the crackdown on protests was a show of weakness, saying that the government's power is illusory and urging Russians not to fear it.

“They can only hold on to power and use it to enrich themselves relying on our fear,” he said. “If we overcome that fear, we will be able to free our Motherland from a bunch of occupants-thieves. And we shall do it. We must do it for ourselves and the future generations.”

Kostya Manenkov contributed to this report.