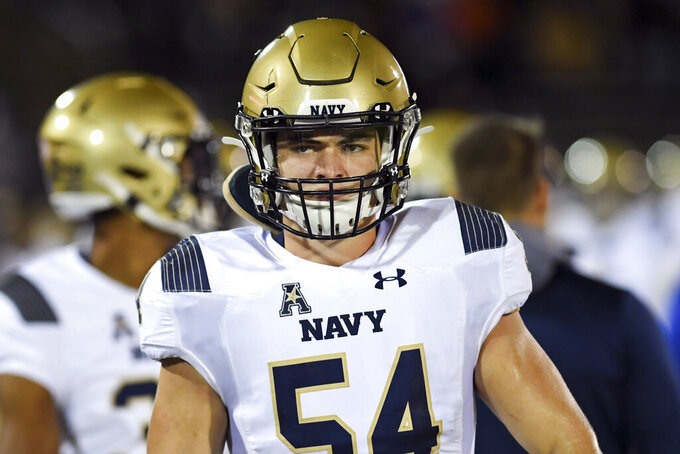 FILE - Navy linebacker Diego Fagot (54) gets ready to go in during the first half of an NCAA college football game against Connecticut, Friday, Nov. 1, 2019, in East Hartford, Conn. The key to the Navy defense is 6-foot-3, 240-pound linebacker Diego Fagot, who led the Midshipmen with 100 tackles last year as a sophomore. (AP Photo/Stephen Dunn, File)

A dominant defense and an efficient passing attack are qualities not normally associated with the Navy football team, which has long relied on its running game to win.

This season could be decidedly different.

With coach Ken Niumatalolo struggling to prepare his offense in the middle of a pandemic, Navy will be sporting a new look when it opens against Brigham Young on Sept. 7.

Senior Dalen Morris takes over at quarterback for Malcolm Perry, who ran for 2,017 yards and 21 touchdowns last year as part of a triple-option attack that averaged a school-record 360.5 yards rushing per game.

Morris is quite adept at throwing downfield, which makes him a dual threat. No longer must Navy run on third-and-10, or wait until falling behind to pass the football.

“We’re always a heavy run team, but with Dalen we feel like we’re going to have some other things to give us a chance,” Niumatalolo said.

But Morris is a work in progress, so for the first time in years the Midshipmen will depend on their defense to retain the Commander-In-Chief’s Trophy and be a contender in the American Athletic Conference.

“We’re counting on our defense to be our strength,” Niumatalolo said. “As we get our quarterback group going, we’re going to rely on our defense a lot. I have total faith in the them.”

The Midshipmen got a late start at summer practice because of the pandemic, and everything they’ve done has been influenced by protocols incorporated to avoid the disease.

“My biggest concern has been COVID-19, how to practice with that,” Niumatalolo said.

Shorter practices and safety issues have influenced the timing of the offense and slowed instruction in the basic skills of the game.

“There are going to probably be some places where we’re lackluster. But it’s the cards we’ve been dealt,” Niumatalolo said. “If we’re not as good tackling, and not as good at blocking, it is what it is. But I’d rather err on the side of safety.”

OPTION TO THE OPTION

Morris came to camp buried on the depth chart, but it didn’t take long for him to make an impression on the coaching staff.

“His play was so powerful you couldn’t help but notice it. He threw the ball really well,” Niumatalolo said. “You have to give credit to that young man. He could have sulked and complain and go into the tank.”

Morris said, “It felt like all my hard work wasn’t in vain. That said, the job isn’t finished. This is just the first box to check.”

After going 11-2 last year behind Perry and the nation’s best running attack, Navy is counting on Morris to lead a more diversified approach.

“Malcolm was a running back that threw the ball," Niumatalolo said. “Dalen is the type of spread quarterback that you see now in high school and college football who can throw. It allows us to open other parts of what we can do.”

The key to the Navy defense is 6-foot-3, 240-pound linebacker Diego Fagot, who led the Midshipmen with 100 tackles last year as a sophomore.

Fagot had seven tackles in the Liberty Bowl last year, helping Navy pull off a 20-17 upset of Kansas State.

“I’m just one little pawn in a big chess match," Fagot insisted. “My goal is to do my part to help the whole defense be successful.”

Despite fielding a team with players that must adhere to the strict rules of the Naval Academy, Niumatalolo has guided the Midshipmen to 10 winning seasons and taken them to 10 bowl games over his 12-year stint at the school.

The Midshipmen were supposed to open the season against Notre Dame in Ireland. Because of the pandemic, the game was moved to the Naval Academy, then canceled altogether. As a result, Navy scrambled to set up an opener against BYU.