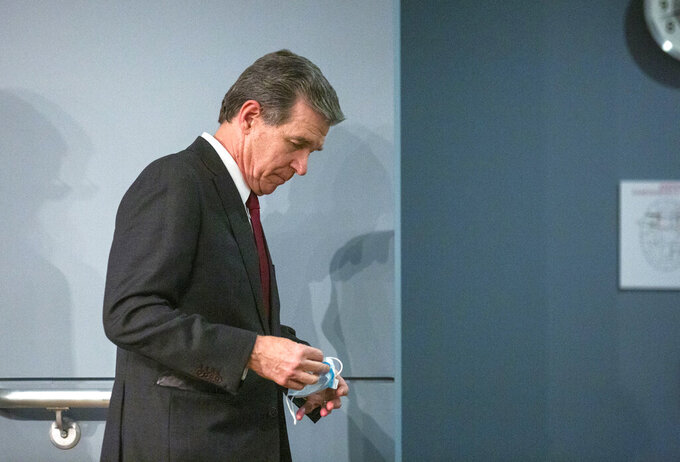 The full House voted to overturn Cooper's orders that have kept bowling alleys and skating rinks closed, allowing them to bring customers indoors up to 50% of their fire capacity. They would have to adhere to social distancing rules and sanitizing standards.

Another measure clearing the Senate Judiciary Committee would provide limited immunity to any business, government agency or nonprofit that takes reasonable steps to reduce transmission risks and lets patrons know about those actions.

The House legislation is the latest effort by GOP lawmakers to speed up the incremental process by which the Democratic governor has eased restrictions on commerce and mass gatherings since early May. Cooper, who already vetoed one bill that would have let bars reopen for outdoor patrons, has said using legislation to open or close business makes it difficult for him and health officials to intervene during a coronavirus surge. Another bill sitting on his desk seeks reopening for bars and gyms.

Rep. John Szoka, a Cumberland County Republican and sponsor of the bowling and skating measure, said local businesses in his community unable to open since March are facing permanent closures without relief.

“We should treat all businesses the same and we shouldn’t pick winners and losers,” Szoka said on the House floor before the measure received tentative approval by a vote of 68-52. “Our small entrepreneurs are good companies too, and they're equally capable of handing COVID-19 safety precautions.”

As with the bill covering gyms, the latest measure for rinks and alleys would permit Cooper to close them again during a spike in cases, but only with the support of a majority of members on the Council of State. After one more affirmative House vote, the bill would go to the Senate. The House voting margin signals that any Cooper veto could be upheld.

House Democrats said it was the wrong time to reopen businesses unilaterally given the recent upticks in cases in North Carolina. State officials reported another record number of virus-related hospitalizations on Tuesday with 829. The number of positive cases now exceed 45,850 with more than 1,150 deaths since the pandemic began.

“No one in this chamber wants to see our economy wrecked,” said Rep. Amos Quick, a Guilford County Democrat, but “we have to stop the spread of this virus, and opening more and more is not stopping the spread.”

The COVID-19 liability measure in the Senate, now heading to another committee, is needed because the cost for a business to merely defending such a lawsuit could push them out of business, according to Cabarrus County GOP Sen. Paul Newton, a bill sponsor.

Monetary damages could still be awarded if a court determined there was gross negligence or intentional wrongdoing. Senate Democrats on the judicial committee questioned why the measure didn't contain more specific safety guidance that the entities must follow.

The House debate also laid bare some hard feelings over the use of personal protective equipment within the Legislative Building, where more Democratic lawmakers are routinely wearing face masks than Republicans.

“If the people in his chamber in leadership roles won’t even take the most basic steps, how can we have the confidence that others will?” asked Rep. Brian Turner, a Buncombe County Democrat. Some Republicans have question the efficacy of reducing the virus’s spread through mask use.

General Assembly police had taken the temperatures of people entering the legislative complex for several weeks, but that protocol has now ended. No one ever registered a temperature high enough to warrant a medical referral, according to complex administrator Paul Coble. Staff workers instead are emphasizing personal protective equipment, enhanced cleaning and other actions to protect people entering the buildings, Coble wrote in an email.

Senate Democrats wrote Republican Senate leader Phil Berger on Tuesday asking that Coble resume the daily temperature checks and that Berger reinstitute seating within the Senate chamber that keeps lawmakers at least 6 feet (2 meters) apart. Berger's office said it would have no response Tuesday evening because he just received the letter.