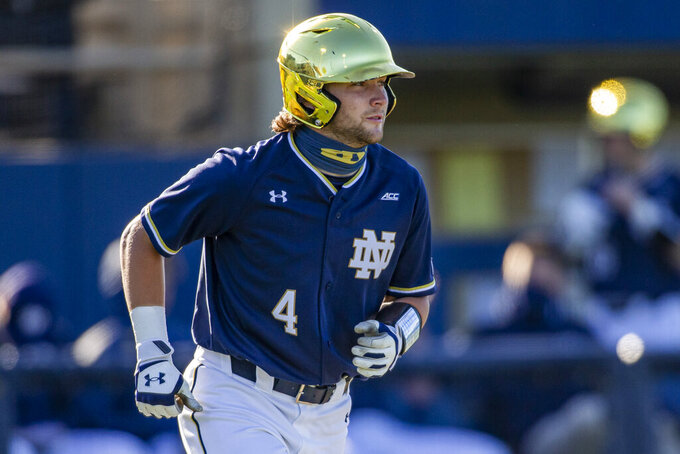 FILE - Notre Dame's Carter Putz is shown during an NCAA baseball game against Florida State in South Bend, Ind., Friday, May 7, 2021. Automatic bids for the NCAA Tournament are on the line as conference tournaments begin in earnest this week. Notre Dame is the top seed in the Atlantic Coast Conference. (AP Photo/Robert Franklin, File)

Automatic bids for the NCAA Tournament are on the line as conference baseball tournaments begin in earnest this week.

The 16 NCAA regional hosts will be announced on Sunday and the rest of the 64-team field next Monday.

There are 30 automatic qualifiers instead of 31 this year. The Ivy League canceled its season because of the COVID-19 pandemic.

A look at the tournaments in the power conferences (the Big Ten and Pac-12 do not play a tournament):

Short hops: Notre Dame (29-10) went 25-10 in conference play, only its second over-.500 ACC record since joining the league in 2014. ... Only Notre Dame, Miami, Duke and North Carolina State enter the tournament with top-40 RPIs. ... North Carolina State's Jonny Butler leads the ACC with a .406 batting average and is among 20 players nationally at .400 or better. ... ACC player of the year Mat Nelson of Florida State leads the nation with 22 homers.

Short hops: The Longhorns have won two of the last three regular-season titles. ... Texas redshirt freshman lefty Pete Hansen is all over the Big 12 pitching leaders chart and leads the league with a 1.80 ERA and a .195 opponent batting average. ... TCU's Austin Krob has allowed just one home run in 73 innings. He goes into the tournament having not surrendered one in 57 2/3. ... Texas Tech's Jace Jung has homered in five of his last seven games and leads the league with 20.

Four NCAA Tournament spots were claimed over the weekend. Arizona (Pac-12) and Nebraska (Big Ten) locked up automatic bids, with the Wildcats clinching a week before their conference's regular season ends.

Norfolk State, playing in the MEAC championship game for the 10th time, broke through for its first title on Alsander Womack’s walk-off RBI single in the bottom of the 11th inning for a 7-6 win over North Carolina Central.

Southern won the SWAC on a quirky three-run homer for a 7-6 walk-off win over Jackson State. O’Neill Burgos sent a drive to left, and when Jatavious Melton jumped for the ball at the wall, his body’s momentum pushed the bullpen gate open. He didn’t make the catch, and umpires ruled the ball cleared the fence.

Arkansas remains the consensus No. 1 team after sweeping Florida at home to join Vanderbilt in 2013 as the only SEC teams to win all 10 conference series.

Two Power Five conference jobs are open after Utah's Bill Kinneberg announced Monday he would retire after 18 years at Utah and 37 years as a head coach or assistant. The Utes are 16-31 heading into their home series against Southern California.

Texas A&M fired Rob Childress on Sunday. Childress led the Aggies to 13 NCAA tournaments in 16 seasons, including two College World Series appearances. A&M was 29-27 but went 9-21 in SEC play and failed to make the conference tournament.

Gary Gilmore picked up his 1,000th win at Coastal Carolina with a 12-2 win over Texas State on Sunday. Gilmore has continued coaching since announcing in February 2020 that he has pancreatic neuroendocrine cancer. The Chanticleers won the 2016 national championship.