Nebraska counting on sharper Martinez in 'prove it' season 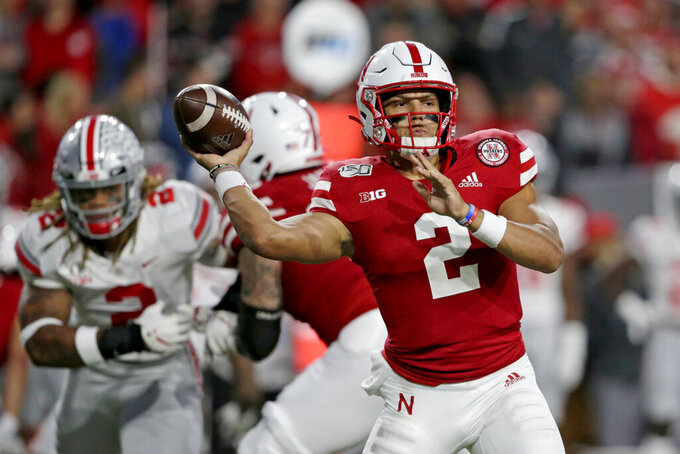 FILE - In this Sept. 28, 2019, file photo, Nebraska quarterback Adrian Martinez (2) throws a pass during the first half of an NCAA college football game against Ohio State, in Lincoln, Neb. Adrian Martinez will be a rare four-year starting quarterback at Nebraska this fall and yet, for all his experience, he's one of the team's biggest mysteries. (AP Photo/Nati Harnik, File)

Adrian Martinez will be a rare four-year starting quarterback at Nebraska this fall and yet, for all his experience, he is one of the team's biggest mysteries.

He was among the best dual-threat quarterbacks in the country as a freshman in 2018 and appeared on Heisman Trophy candidate lists the next spring.

But a sophomore slump set in amid injuries, he seemed to lose a step and committed 13 turnovers in 10 games. It didn't get better in last year's pandemic-shortened season. He continued to struggle hanging onto the ball, and he lost the starter's job for two games as the Cornhuskers went 3-5.

Martinez faced no serious competition this spring following Luke McCaffrey's transfer, so how the senior from Fresno, California, plays this fall will largely determine whether the Huskers can win more than five games for the first time in coach Scott Frost's four seasons.

“There's been a lot of ups and downs for sure over my career here and I just want to leave it all out there — and not just for me," Martinez said. "I think it’s a prove-it year for us, as a team. There’s a lot we’re capable of. That doesn’t mean it’s going to be easy. You have to work for it, prove it to each other and prove it to this state and everybody else.”

The Huskers, who play their spring game Saturday, have made their biggest upgrades at receiver even though 2020 leader Wan'Dale Robinson transferred.

Samori Toure, an FCS All-American at Montana in 2019, joined the team as a graduate transfer, and Omar Manning, the top junior college receiver two years ago, is having an impressive spring after sitting out most of last season with an injury.

Toure and Manning give the Huskers a chance to stretch the field, something they struggled to do under Frost and offensive coordinator Matt Lubick last year.

“I feel confident in what Frost and Lubick are doing to mix it up and give us more opportunities,” Martinez said.

Beyond delivering the ball to his receivers, quarterbacks coach Mario Verduzco said, there's one point of emphasis for Martinez.

“No more fricking turnovers. That’s it,” Verduzco said. “You have to take care of the damn ball, seriously.”

Martinez, who started six games and played one series in a seventh, lost five of seven fumbles and threw three interceptions.

Martinez's worst turnover game was the finale at Rutgers. He fumbled on two of the first three possessions and threw interceptions in the second and third quarters — and the Huskers won 28-21.

Martinez has thrown 14 touchdown passes against 12 interceptions the last two seasons. He's confident he can cut down on the interceptions with better decision-making.

As for the fumbles, he said he's had a bad habit of trying to make a play that isn't there, and that has left him vulnerable.

“The effort’s there as far as trying to gain yards and get the first down, whatever it is,” he said, “but guys are punching at the ball and I’m too loose with it. I have to clean that up.”

McCaffrey pushed Martinez hard last spring and in preseason practices before Frost elected to go with the incumbent. The job opened again following season-opening losses to Ohio State and Northwestern.

McCaffrey started and won against Penn State, but one of the lasting images from that game was a video of Martinez's impassioned locker room talk where he spoke of the importance of the team's success over his own.

“I didn’t give up and I continued to be a leader and I think more than anything it showed to myself I could still have an impact on the field during practice without being the starting quarterback,” he said.

It was the first time a healthy Martinez didn't start a game for the Huskers. He also was on the bench for all except the last possession against Illinois the next week. He regained the job for the last four games.

“I never would have in a million years anticipated Adrian maybe needed that,” Verduzco said of the benching. “Here we are now. Don’t allow that same sort of thing to take place a second time around.”

Message received, Martinez said. He said he's lost a little weight, feels faster and has concentrated on strengthening his arm. He said he never has been more motivated.

“You go through losing your job, getting it back," he said, “I think that mentality is something I have to stick with and something I won't neglect.”