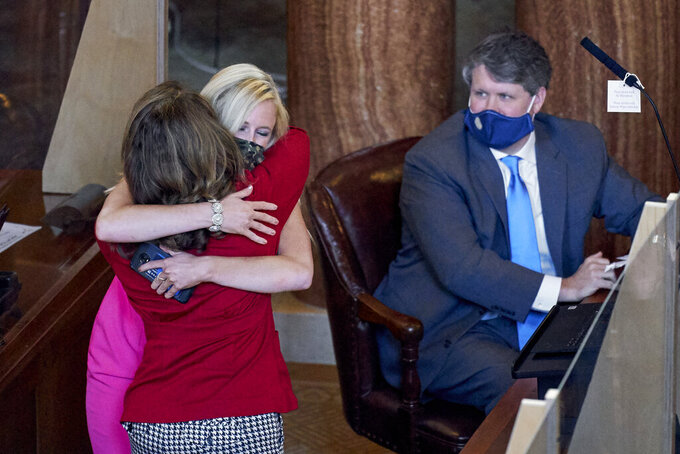 Nebraska state Sen. Suzanne Geist of Lincoln, left, is hugged by Sen. Julie Slama of Peru as Sen. Mike Hilgers of Lincoln watches, following the passage of LB814, Geist's bill to prohibit the dilation and evacuation procedure during an abortion, in Lincoln, Neb., Thursday, Aug. 13, 2020, on the last day of a legislative session marked by major disruptions from the coronavirus and political feuds that often turned personal. (AP Photo/Nati Harnik)

LINCOLN, Neb. (AP) — Nebraska lawmakers approved new tax credits for homeowners, farmers and businesses and put more restrictions on abortions Thursday as they finished a session marred by ugly public disputes and criticism that they didn't do enough to address the coronavirus pandemic.

The 60-day session ended after several last-minute, unsuccessful attempts to derail the tax and abortion bills. Lawmakers gave both measures final approval and sent them to Gov. Pete Ricketts, who's expected to sign them.

Lawmakers convened as normal in January but suspended their session in March out of concern about the pandemic. They returned in July with new safety precautions, including plastic barriers to separate senators and new restrictions on who could access the legislative chamber.

Debate among senators turned nasty at several points this year, with one lawmaker publicly telling another to “shut up” and others lamenting that the ostensibly nonpartisan, one-house Legislature has become more openly partisan and dysfunctional.

Speaker of the Legislature Jim Scheer acknowledged that the session was often rocky. But he pointed to major new laws passed, including measures to help expand broadband internet, improve oversight of state-run juvenile rehabilitation centers and provide a tax cut for military retirees.

“We've accomplished a lot, whether we realize it or not,” Scheer said.

The property tax and business incentives package drew opposition from some lawmakers who said it would pull money away from people who will need financial assistance because of the pandemic.

Lawmakers did approve Ricketts' emergency request for $83.6 million for the state's pandemic response before they paused their session, but some argued that the state should do more. The package included funding for personal protective equipment, scholarships and unemployment benefits.

Wayne said lawmakers were “putting handcuffs on our opportunity to help people," and noted that the pandemic's full impact may not have registered. He pointed to the Big Ten's decision to cancel its 2020 football season, a significant blow to the University of Nebraska-Lincoln and Lincoln's economy.

But Sen. Lou Ann Linehan, chairwoman of the Legislature's tax-focused Revenue Committee, said the bill reflects a compromise that will ultimately help Nebraska residents by reducing their tax bills. Lawmakers have faced pressure for years to lower property taxes, and the tax credit would help put a dent in some of the recent increases.

“What I'm not hearing right now is how important this bill is to the vast majority of Nebraskans,” Linehan said. “It is significant relief to people.”

Ricketts likewise praised lawmakers for their work on the tax package

“You are to be commended for the hard work you put in during the most trying and difficult circumstances,” he said in his end-of-session remarks to lawmakers.

Nebraska Farm Bureau President Steve Nelson said the measure “takes a major step forward to provide significant, meaningful and much-needed property tax relief for Nebraskans," but added that his group will continue to seek “long-term solutions” to reduce those taxes.

Lawmakers also passed new restrictions on a second-term abortion procedure, despite protests from abortion-right supporters. The measure would outlaw the use of clamps, forceps, tongs or scissors to perform what's known as a dilation and evacuation abortion. Abortion opponents refer to the procedure as a dismemberment abortion because it often requires doctors to remove a fetus in several pieces. Similar laws in other states have been struck down as unconstitutional.

This session could also be the last for Sen. Ernie Chambers, the state’s longest-serving and best-known lawmaker, who will have to leave the Legislature for at least four years before he can run again. Chambers is famous for his ability to single-handedly filibuster bills, often bringing the Legislature to a standstill.

State law restricts lawmakers to two consecutive four-year terms, but allows them to return after sitting out for one term. Chambers, now 83, hasn’t said whether he’ll run again.