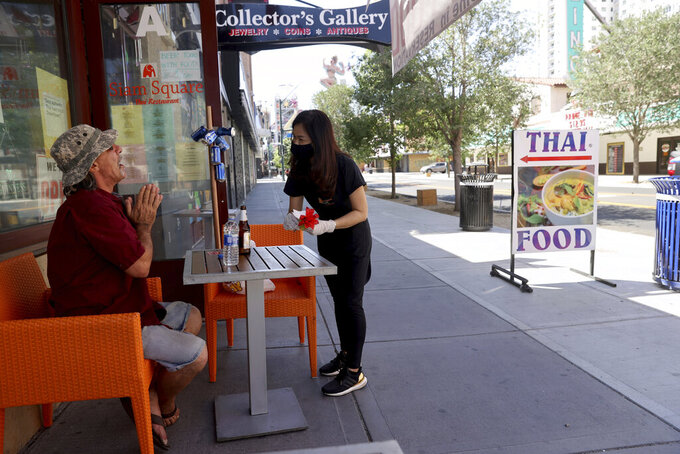 In this Thursday, May 14, 2020 photo, SaJenny Prapasanobol, a server Siam Square on East Fremont Street in downtown Las Vegas, helps David Haight. The business moved tables to the sidewalk in front of the restaurant after The City of Las Vegas temporarily allowed outdoor dining on public sidewalks. (K.M. Cannon/Las Vegas Review-Journal via AP)

LAS VEGAS (AP) — Nevada unemployment officials expect as many as 70,000 idled self-employed, contract and gig workers will apply for $600 per week in coronavirus relief benefits promised by Congress, once phone and online systems for the state's jobless program open on Saturday.

“We do expect a significant and high volume of callers,” new interim Department of Employment, Training and Rehabilitation chief Heather Korbulic told reporters during a brief videoconference about the program on Friday.

Korbulic said 100 operators at a contractors' office are trained and able to handle Pandemic Unemployment Assistance applications and questions from applicants including ride-hail drivers, salon workers and independent contractors entitled to relief after being idled due to business closures related to the coronavirus.

The assistance for gig workers is part of a sweeping federal aid package passed by Congress. Nevada was among the last states to get the system working.

Korbulic said payments are expected to start going out May 23 and will be backdated to the earliest date applicants were unable to work or unemployed.

The move to start the program came just days after two Reno women filed a lawsuit to force the state to begin processing and paying the benefits.

Korbulic did not answer a question Friday about whether the start of the program was hastened by the lawsuit. But a spokeswoman for Gov. Steve Sisolak said the governor and DETR had targeted a mid-May launch.

Mark Thierman, the attorney handling the lawsuit in state court in Reno, acknowledged that implementation of the program could make the legal case unnecessary.

In other developments, the city of Las Vegas announced that downtown restaurants and businesses can seat patrons on sidewalks during regular business hours.

As part of the first state of reopening the state's economy shuttered to stop the spread of the virus, Sioslak said restaurants can let customers dine inside if they make reservations and are separated from other diners, among other requirements.

Sisolak last week initially said restaurants within the state’s still-shuttered casinos may not reopen . But the Nevada Gaming Control Board said Friday the state had reconsidered and would allow them to open as long as they comply with state and local government requirements, Michael Lawton, analyst for the state Gaming Control Board, said in an email Friday.

The board said casinos may open their restaurants if they comply with rules set out by state and local governments and can show that there are separate entrances and bathrooms available for restaurant customers to use without customers walking across casinos floors.

The governor said at a news conference Friday afternoon that the change was made to accommodate the state's smaller cities and towns where some of the few restaurants in the area are in casinos.

Sisolak said the number of hospitalizations due to COVID-19 and positive tests for the virus have continued to drop, but it's too soon to see any data showing the impact of the initial reopening. The governor said he did not have any details to share yet about what restrictions would be eased next and when.

Nevada has reported 339 deaths from COVID-19 and more than 6,600 positive cases of the virus.