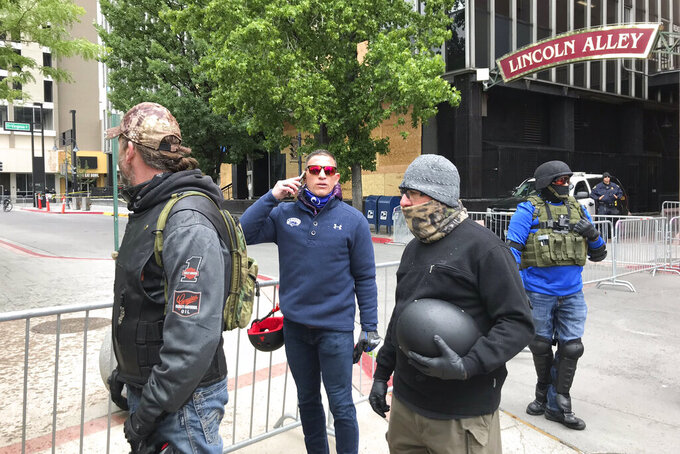 Joey Gilbert holds his phone while standing with others near a Black Lives Matter Peace Vigil in Reno, Nev., Monday, June 7, 2020. A Reno attorney who was in D.C. protesting the 2020 election results during the Jan. 6 insurrection is running to be the governor of Nevada. Former professional boxer Joey Gilbert announced on Saturday, June 12, 2021, that he intends to run to replace Democratic Gov. Steve Sisolak in 2022. (Anjeanette Damon/The Reno Gazette-Journal via AP)

CARSON CITY, Nev. (AP) — A northern Nevada attorney who has questioned the results of the 2020 presidential election and was outside the U.S. Capitol the day it was violently stormed has announced he's running for governor.

Republican Joey Gilbert told an applauding audience at the Ahern Hotel in Las Vegas over the weekend that he planned to challenge Democratic Gov. Steve Sisolak in Nevada's 2022 gubernatorial race, according to a video of the event posted on Facebook.

Gilbert's assistant Andrea Wexelblatt said he was unavailable to comment Tuesday but she confirmed his campaign announcement to The Associated Press.

Gilbert, a former professional boxer, said in his remarks Saturday that he believed Donald Trump won the 2020 presidential election and was “still our president."

“Let me say this: If election integrity is not the No. 1 issue of these guys running, then they’re either lost, confused, or too stupid to be running,” he said, referencing other Republicans who intend to run.

He positioned voter fraud allegations at the center of his campaign, falsely claimed COVID-19 vaccines were unproven and urged people not to take them. He also referred to the coronavirus as a “plandemic,” using a term that suggests the pandemic was intentionally created.

The coronavirus vaccine has been administered to millions of people across the world, the vast majority of whom have not experienced side effects. Research has shown that the COVID-19 vaccines approved for emergency use by federal health officials prevent severe illness from COVID-19.

Gilbert joins Clark County Sheriff Joe Lombardo, North Las Vegas Mayor John Lee and Gardnerville doctor Fred Simon in the Republican primary field. U.S. Rep. Mark Amodei has said he’s mulling a run against Sisolak and that former U.S. Sen. Dean Heller informed him that he was considering it as well. Amodei and Heller, both Republicans, have not announced any decisions.

Gilbert was advertised as a speaker for a “MAGA Freedom Rally,” organized by the anti-vaccine political action committee United Medical Freedom, one block from the U.S. Capitol the day of the Jan. 6 insurrection.

The Reno Gazette Journal reported in January that Gilbert had also gone to the Capitol after barricades were torn down and the building was overrun by hundreds of Trump’s supporters. Gilbert said in a video on his Facebook page that he had not gone inside the Capitol. Gilbert did not respond to emailed questions about actions on Jan. 6. He has not been charged with any crime related to the insurrection.

In addition to advertising his legal practice on billboards throughout the Reno area, Gilbert is a fixture at rallies for right-wing causes in northern Nevada.

Gilbert has spoken at events in rural Elko and Lander County celebrating local officials’ decisions to join the Constitutional Sheriffs and Peace Officers Association, a right-wing group that believes county sheriffs have a duty to uphold the constitution that supersedes other elected officials up to the president.

He’s worked with local activists in rural counties to rescind mask mandates and filed lawsuits challenging restrictions put on businesses and places of worship to prevent the spread of COVID-19.

He has protested Black Lives Matter, COVID-19 restrictions on businesses, the teaching of critical race theory in schools and the results of the election.

Legal challenges attempting to invalidate President Joe Biden’s electoral victory in Nevada have failed in the courts and Nevada's Republican Secretary of State Barbara Cegavske has defended the results as reliable and accurate.