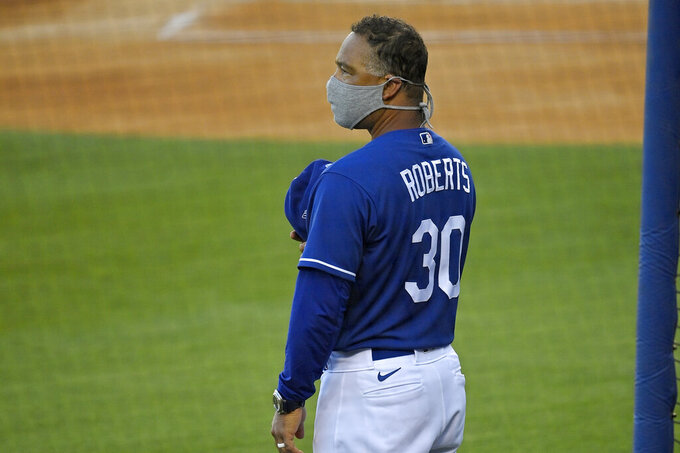 LOS ANGELES (AP) — The Los Angeles Dodgers were eager to show off $100 million worth of stadium renovations to fans and a national audience at the All-Star Game this summer.

Turns out, it appears only players are going to see the changes up close this season because of the coronavirus pandemic, which will keep the public out of the ballpark for at least the early portion of a 60-game schedule that begins July 23. The Dodgers won't host the All-Star festivities until 2022.

The black tarp that served as the backdrop in center field is gone, replaced by a new center field plaza that may take some getting used to for hitters.

First baseman Max Muncy was hit by a pitch on his left ring finger during the team's intrasquad game Tuesday.

“I couldn’t really see the ball,” he said Wednesday on a video conference call. “I’m trying to adjust to some of the changes out there.”

Muncy said he’ll stop swinging a bat while his finger heals, but he expects to be ready for opening day.

The new batter's eye has a bar on top of it that is out of the hitters' view but where fans can watch the game — under normal circumstances. There's a new pedestrian walkway behind the speaker towers in center field that encircles the stadium.

“It’s different from what we’re used to,” Muncy said. "Pitchers are pretty happy about the batter’s eye out there.”

Manager Dave Roberts said, "You don’t want a player to not be able to see, to put him in harm’s way. For Max to say he couldn’t see the ball because of the background, that’s a little unsettling.”

Roberts has said he can't comment on the reasons for the absences.

“I'm hopeful we'll get all those guys back soon,” he said.

Teams are prohibited from saying whether a player tested positive for COVID-19 unless the player gives permission. The COVID-19 injured list, which has been added during the pandemic, will be kept confidential.

Roberts and President of Baseball Operations Andrew Friedman have said there have been positive tests among players, but didn’t reveal any names.

The Dodgers have 2 1/2 weeks of workouts and three exhibition games to prepare for the shortened season.

“Being late to summer camp certainly puts them behind the 8-ball because of the repetitions, getting your legs under you, getting the at-bats, the innings, building up, all that stuff. Certainly it makes it a little more difficult,” Roberts said.

Each of the missing players figures to have a role in the team's push to return to the World Series after losing in back-to-back appearances in 2017 and 2018.

Jansen has been the team's closer since 2012 and earned his 300th career save last year. Pollock hit .266 with 15 home runs and 47 RBIs in 86 games last season, when he missed 2 1/2 months because of an elbow injury. Pollock's wife gave birth to a girl three months prematurely in May.

“If there's any chance of putting her at risk, it gets to be a difficult decision,” Pollock told SportsNetLA, the team's TV network, last month.

Báez and Alexander would work in relief. Gonsolin is among those in the running to fill David Price's spot in the starting rotation. Lux was a September call-up last year who homered in his first at-bat in his postseason debut. Ruiz could make his debut this season.

The Dodgers will be without Price and right-hander Jimmy Nelson this year. Price has decided to sit out after being acquired from Boston last offseason, while Nelson underwent back surgery and is out for the season.