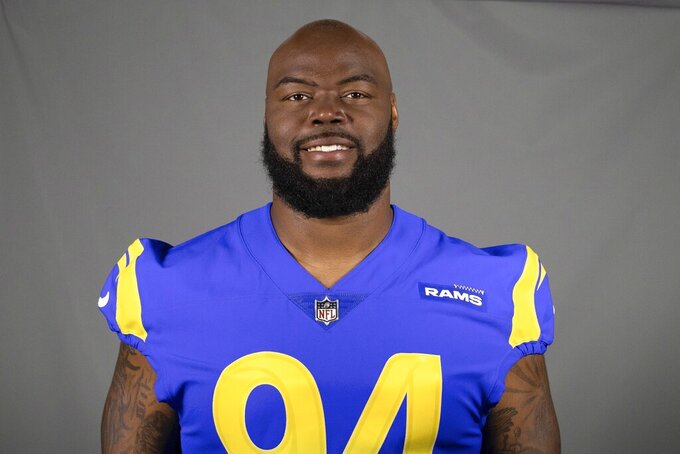 FILE- This is a 2020 file photo of A'Shawn Robinson of the Los Angeles Rams NFL football team. The Rams activated Robinson to their 53-man roster Friday, Oct. 30, 2020, but they haven't decided whether the hulking defensive tackle will play Sunday at Miami. (AP Photo/File)

THOUSAND OAKS, Calif. (AP) — Right before A'Shawn Robinson's first day of training camp with the Los Angeles Rams, the veteran defensive tackle swerved from the excitement of a fresh start to the uncertainty of a potentially serious medical problem.

With his health improved and his future with his new team looking bright, Robinson is eager to get to work.

“Football is life,” Robinson said. “It’s been my life since I was 2 years old. I ain’t never going to stop it, and that’s my excitement. I’ll never stop.”

The Rams (5-2) activated Robinson to their 53-man roster Friday, but they haven't decided whether the hulking defensive tackle will play Sunday at Miami (3-3).

The fifth-year pro has been practicing for two weeks, and he should provide an all-around boost to the interior of Los Angeles' defensive line when he finally gets the go-ahead to make his Rams debut.

The 6-foot-4, 330-pound Robinson has obvious skills as a run-stopper, but he also batted down 16 passes during his first four NFL seasons with the Detroit Lions. The Rams’ run defense has been near the middle of the league pack this year, so Robinson’s arrival will address an area of need, whether it happens Sunday or after Los Angeles' upcoming bye week.

“We look forward to getting him back rolling with us, because he’s going to be a big addition and a big boost to our team,” coach Sean McVay said.

Robinson and the Rams have been deliberately vague about his medical condition, with the team citing privacy concerns while Robinson says he simply wants to move forward. Robinson on Friday called it “a respiratory situation (that) happened in the past, and now we've moved on.”

Robinson confirmed that one of his biggest concerns was the possibility his condition could be worsened by contracting COVID-19, but his worries apparently were assuaged over the past two months.

“It was annoying, very annoying,” Robinson said. “I was excited to get in with the guys, and things happened. It's life. ... I think about it every day, just in general with COVID."

Robinson joined the Rams last spring as a free agent after a college career at Alabama and four seasons with Detroit, but he's already had quite an eventful few months in Los Angeles even before his first game with his new team.

The Rams initially signed Robinson to a two-year, $17 million deal as a replacement for Michael Brockers, the big run-stopping tackle who signed with Baltimore early in free agency. When Brockers’ deal with the Ravens broke down due to medical concerns, the Rams jumped back in to re-sign Aaron Donald's longtime linemate — but they also kept Robinson, who said he would embrace whatever role the Rams found for him.

“He’s going to add big-time depth to the front,” McVay said. “He’s got versatility across the front, physicality, athleticism. He can play in all personnel groupings, and that was what we liked so much about him.”

Robinson likely would have played a major role from the start, but the Rams placed him on the non-football injury list right at the start of training camp.

Robinson got into practice last week for the first time, but he made it through those tough first 2 1/2 months with ample help from his teammates and his new defensive coordinator, Brandon Staley.

“Coach Staley every day would tell me, ‘One day at a time,’” Robinson said. “'Chase the day. Treat it as if you can beat this day. Don't worry about what it's going to be down the road.' It kept me in good spirits. ... It's a real brotherhood here. It's very different from where I've been, and being here is where I want to be. I'm excited to be back out there with those guys and give them everything I can to help.”

NOTES: The Rams won't decide until Sunday whether TE Tyler Higbee will play, McVay said. Higbee missed Monday's victory over Chicago with a hand injury that makes it painful to catch passes. ... The rest of the Rams should be ready to play in Miami, with everyone participating in practice Friday. ... The NFL trade deadline is Tuesday, but McVay thinks it will be quiet for the Rams, who have swung their share of big midseason trades over the past few seasons. “We feel really good about where we're at,” McVay said. “We're in good shape. Do not anticipate any crazy moves ... unless we have one.”