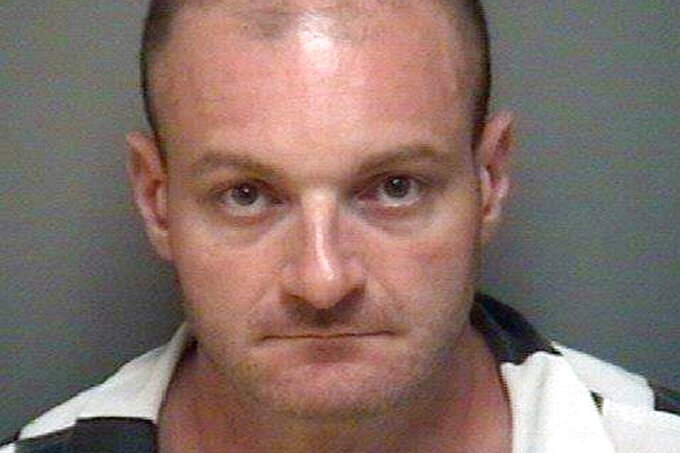 CONCORD, N.H (AP) — A white nationalist who rose to prominence during a deadly 2017 rally in Charlottesville, Virginia, went on trial Tuesday on federal charges of threatening to rape the wife of a man who was part of a racist group he had been feuding with for months.

Christopher Cantwell, a New Hampshire resident, has remained in federal custody since he pleaded not guilty in January to using the Telegram messaging app to convey the threat last year.

He also threatened to expose the identify of the Missouri man if he didn't provide personal details of the leader of the Bowl Patrol, a white supremacist group of which the man was a member. The group's name was inspired by the haircut of Dylann Roof, who was sentenced to death for fatally shooting nine Black church members during a Bible study session in Charleston, South Carolina.

“This is an extortion case,” Assistant U.S. Attorney John Davis told the jury, adding that Cantwell's intention was to dox or publicize the victim's true identify, a process which “can wreck a person's reputation.”

Cantwell's attorney, Eric Wolpin, told the jurors that the charges were baseless. He insisted the alleged threats from Cantwell were simply bluster aimed at scaring off the man and other members of his group, who Wolpin alleged had been harassing Cantwell for months after a falling out. They disrupted Cantwell's radio show with pranks, Wolpin said, and defaced his website with pornography and violent content.

“He said what he said to be left alone,” Wolpin said. “Chris Cantwell is not guilty.”

Wolpin noted that Cantwell initially took his concerns of harassment by members of the Bowl Patrol to the FBI, but asserting that the agency was only interested in prosecuting his client, not investigating his claims.

The case was the first jury trial to take place in front of Judge Paul Barbadoro since the coronavirus pandemic began.

Everyone, including Cantwell, wore a mask and one member of the public was denied entry after refusing to wear one. The microphone was sanitized after each person spoke and members of the public were limited and socially distanced.

Several of the witnesses are scheduled to testify via video link, though the first testimony was repeatedly delayed due technical glitches.

Cantwell previously pleaded guilty to assault in 2018 after he was accused of using pepper spray against two counterprotesters during the Unite the Right white nationalist rally in Charlottesville in 2017. Under the details of the plea agreement, he didn't serve additional jail time but was barred from Virginia for five years.

Cantwell, who has hosted self-produced radio shows, also has history of posting threatening messages over social media. Last year, attorneys who filed a federal civil rights lawsuit in connection with the Charlottesville rally asked a judge to order Cantwell to stop making “unlawful threats” against the plaintiffs and their lead attorney.

In a motion in U.S. District Court in Charlottesville, lawyers for 10 people who were hurt during the two days of violence in August 2017 said Cantwell had recently focused “his hateful rhetoric” on attorney Roberta Kaplan.

They allege that Cantwell, responding to an article about Kaplan in a Jewish publication, used an anti-Semitic slur on a social media website when referring to Kaplan and wrote that after she “loses this fraudulent lawsuit, we’re going to have a lot of (expletive) fun with her.”

Cantwell, responding to an email seeking comment on the motion to order him to stop making threats, used an anti-Semitic slur when referring to Kaplan and called the lawsuit a “(expletive) fraud.”