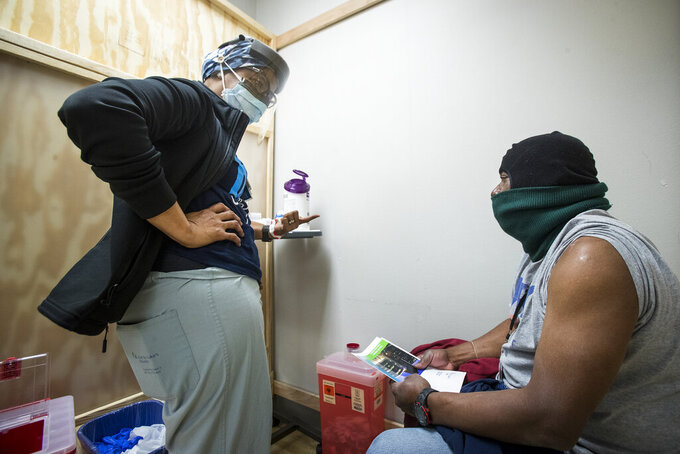 HOUSTON (AP) — Officials in Houston are hoping to address the racial disparity within Texas and the U.S. in who is receiving COVID-10 vaccines with a new clinic on the campus of one of the area’s historically Black universities.

Baylor St. Luke’s Medical Center, one of the hospitals from Houston’s Texas Medical Center, has partnered with Texas Southern University for the clinic that starting Monday will administer vaccines to some of the areas most vulnerable populations, including people 75 years and older and minorities who meet the state’s guidelines for vaccine distribution.

St. Luke’s Health CEO Doug Lawson said the clinic was part of the hospital’s efforts to reach out to communities of color, underserved communities and address “racial inequities in the health care that we are delivering.”

The campus clinic is located in Third Ward, one of Houston’s historically Black neighborhoods, and will allow the hospital to serve one of the communities hardest hit by the pandemic, said Elizabeth Youngblood, president of Baylor St. Luke’s Medical Center.

A recent analysis by The Associated Press shows that a racial gap has opened up in the nation’s COVID-19 vaccination drive, with Black Americans in many places lagging behind whites in getting shots.

In Texas, Black people make up 13% of the population and 18.2% of the health care workforce but only 7.2% of the vaccine recipients so far, according to the AP’s analysis.

In Houston, Mayor Sylvester Turner said 43% of whites have been vaccinated, compared to 21% of Hispanics, 18% of Blacks and 8 to 9% of Asian Americans. According to Census figures, more than 70% of the city’s population is made up of Blacks, Hispanics and Asian Americans.

The mayor has welcomed the large mass vaccine distributions the city has held, including a new one that will start Feb. 24 at NRG Stadium. But he has worried that while such sites are “good for numbers ... they’re not good for equity.”

Many of the residents the new clinic hopes to serve are “on the margins and they’re constantly battling not just to thrive but just to survive and now here comes this virus and it’s impacting them even more,” Turner said.

“We can work together to make sure this vaccine is distributed to people in the city of Houston but especially to people who have been disproportionately impacted by this insidious virus,” he said.

In the state, there were 385 deaths reported Thursday from COVID-19, the illness the coronavirus causes, according to the Texas Department of State Health Services. The same number of deaths were reported on Wednesday. The state’s death toll has risen to 40,200 according to data from Johns Hopkins University.

The state also reported 8,435 new coronavirus cases Thursday. Since the pandemic began, there have been over 2.5 million cases in Texas according to the COVID Tracking Project. On Thursday, 8,933 patients were hospitalized for COVID-19.