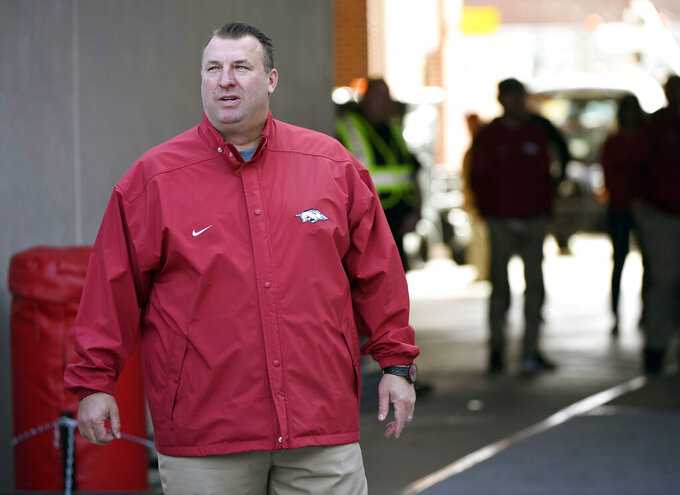 FILE - In this Friday, Nov. 24, 2017 file photo, Arkansas coach Bret Bielema gets choked up as the senior players are introduced before the start of an NCAA college football game in Fayetteville, Ark. It's going on 40 days since Bret Bielema was announced as Illinois' football coach, and since then he's assembled a staff, met returning players, recruited new ones, convinced a top player to pull his name out of the transfer portal and made the rounds getting to know administrators and alumni. (AP Photo/Michael Woods, File)

CHAMPAIGN, Ill. (AP) — It's going on 40 days since Bret Bielema was announced as Illinois' football coach, and since then he has assembled a staff, met returning players, recruited new ones, persuaded a top player to pull his name out of the transfer portal and made the rounds getting to know administrators and alumni.

Bielema has no plans to slow down. The team started winter conditioning this week, and he still has to finalize a spring roster after he adds a couple more players to the 2021 recruiting class.

“I’m trying to get the best players so we can have the best team we possibly can this year,” Bielema said Wednesday. “I'm not going to skip a step to get to where we want to be, but I’m trying to be good now. I don’t want to wait three years from now. The way the rules are now, you can try to do that.”

Bielema, who won three Big Ten championships at Wisconsin before moving on to Arkansas, has worked in the NFL the past three years. He signed a six-year contract paying $4.2 million annually. He took over a program that hasn't had a winning record since it went 7-6 in 2011. The man he replaced, Lovie Smith, was 17-39 in five seasons.

The Illini will build around what Bielema called “bonus seniors," players who are allowed to return for another season because of the disruption caused by the COVID-19 pandemic.

Quarterback Brandon Peters announced Dec. 29 he would be back in 2021, and Bielema talked top defensive lineman Owen Carney Jr. into taking his name out of the transfer portal and return.

Bielema said he has spent a lot of time in his “Zoom Room” since arriving. That's where he's met with recruiting prospects and their families and held individual meetings with players who are returning or who he wanted to convince to return.

Bielema said he was sensitive to the emotions of the seniors while they were considering their options.

“”I know Lovie's a good man. He had an effect on a lot of these guys' hearts," he said. “I was always trying to be respectful. With this transition, I hope to take you to a higher level. That's just being real with them. Some of these guys had to go through the pain of, ‘It hasn’t been very fun here the last couple years and I just lost coaches I love.' ”

Illinois signed 14 high school seniors, all rated as three-star prospects, three days after Smith was fired and three days before Bielema was introduced as the new coach.

“Those guys are all welcome into our family,” Bielema said. “I’ve reached out to them, built a relationship, a couple are on campus already.”