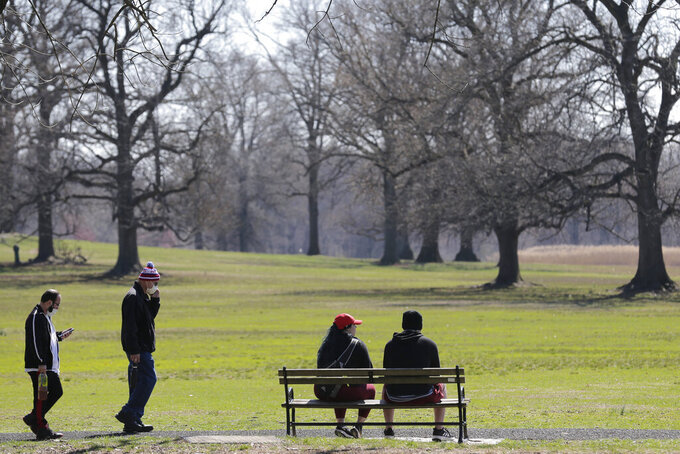 TRENTON, N.J. (AP) — New Jersey's death toll from the coronavirus surpassed 1,000 people, even as evidence began to show the state is beginning to flatten the curve of the virus, Gov. Phil Murphy said Monday.

In the previous 24 hours, New Jersey fatalities from COVID-19 had climbed from 917 to 1,003, Murphy said. He also said that data are beginning to show that the social distancing he mandated last month is starting to pay off.

He added there may still be anomalous days, but overall the curve “is beginning, and I use that word cautiously, is beginning to flatten.”

New Jersey and New York are among the hardest-hit states in the country. New Jersey is likely weeks away from hitting the peak of the outbreak, according to health officials.

Bergen, Essex and Hudson counties in suburban New York have seen the most cases.

A look at developments:

Among the fatalities was Jersey City Councilman Michael Yun, according to Murphy and Mayor Jersey City Mayor Steven Fulop.

The near shutdown of the state's economy as part of social distancing seems to be paying off, the governor said.

For the first time, state health officials said that the height of the outbreak would likely come between April 19 and May 11, with anywhere from 86,000 to 509,000 positive cases.

Hand-washing and social distancing will have to continue for a while, the governor said, though he didn't specify how long.

“The curve is flattening, but this is no time to spike any footballs or take our foot off the gas," he said.

Some beds on the USNS Comfort hospital ship that recently arrived to help New York battle the virus will go to New Jersey residents, Murphy said.

The governor didn't have many details, as he said he had just gotten off the phone with President Donald Trump, who approved the governor's request for beds on the ship.

Murphy termed violators of the executive order requiring people to stay at home during the emergency “knuckleheads” and said they would continue to face citations.

The governor's message came just as authorities in New Jersey's biggest city cited more than 800 people and ordered dozens of businesses closed on charges they violated the governor's stay-at-home order.

Newark Public Safety Director Anthony Ambrose told NJ.com that 842 people were issued summonses, and 44 nonessential businesses have been closed in the week since police began cracking down.

Police at first gave people warnings but began to issue summonses on March 31, according to authorities. Gov. Phil Murphy signed the stay-at-home directive on March 21.

People had been “blatantly”violating the order, Ambrose said.

There have been other reports of citations across the state, as well.

A performance by a Pink Floyd cover band that drew about 30 adults to the front yard of a home on Saturday night has resulted in charges against a Rumson man.