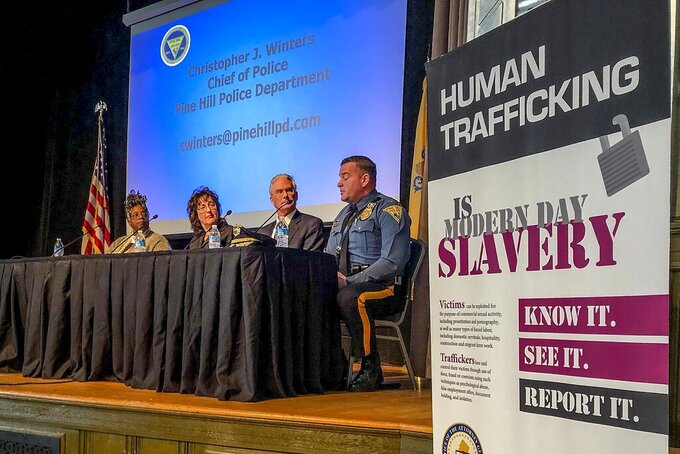 FILE — In this Jan. 24, 2020 file photo, panelists at the New Jersey attorney general's annual human trafficking awareness event talk about how to prevent the crime, in Trenton, N.J. After failing for five years to fully carry out a state anti-human trafficking law, New Jersey officials made good on a promise last year to reinvigorate the commission tasked with preventing the crime. (AP Photo/Mike Catalini, File)

TRENTON, N.J. (AP) — After failing for five years to fully carry out a state anti-human trafficking law, New Jersey officials made good on a promise last year to reinvigorate a commission tasked with preventing the crime by appointing staff and providing funding.

New Jersey's Human Trafficking Commission's return to full operations has been a year in the making, following a pledge from Attorney General Gurbir Grewal to push for the panel to resume its work after a five-year hiatus.

The commission is set to meet — remotely because of COVID-19 — on Wednesday, the latest gathering since the panel reached a full quorum in the summer.

New Jersey set up the Human Trafficking Commission in 2013 under a law to raise awareness about trafficking and evaluate whether state laws worked effectively against it. But The Associated Press found last year that the commission had lacked enough members to meet regularly and had not issued required public reports about its work for nearly five years.

Attorney General Gurbir Grewal promised his office, which oversees the commission, would get it operating again.

In June, the commission got enough members to resume meeting, with Gov. Phil Murphy appointing three new commissioners. It held 10 meetings in 2020 and issued a consolidated, nine-page report for 2016-2019. A 2020 report is pending.

Experts call human trafficking modern-day slavery. New Jersey's 2013 law defines the crime in part this way: holding, recruiting, luring or transporting a person to engage in sexual activity or labor by threatening to harm them.

Ingrid Johnson, a mother of a trafficking survivor who has served as a board member of the NJ Coalition Against Human Trafficking, was tapped as one of the new commissioners. She said in an interview she never expected to be involved in preventing trafficking and instead was “hoping this God-awful thing would go bye-bye."

“I’m still shocked that my voice is wanted or needed to fight against human trafficking," she said, adding that serving on the commission has become a vocation.

“It’s a huge service," she said. “I am committed to fight human trafficking for the rest of my life."

The latest report running through 2019 has uncovered what commissioners say are a “gaps” in anti-human trafficking training, including at the judiciary and among local governments across the state. The report also showed that there have been 40 convictions on trafficking charges from 2017 to 2019, overwhelmingly in Atlantic County.

Grewal said in response to the commission resuming its work that his department would focus on enforcement and funding victims services to “prevent and combat” trafficking, while the commission works on policy and prevention.

Lawmakers and the governor also set aside $100,000 in 2019 for the commission, which previously had been unfunded. After the commission began operating fully again, it used half of the money for a campaign aimed at 12- to 16-year-olds to promote internet safety, among other things, and the other half went to improving data collection.

Kate Lee is the executive director of the NJ Coalition Against Human Trafficking and said the allowance, though small, goes a long way. She added that the 2013 law, which calls for using fines from traffickers to combat the crime, has not worked.

“To continue this momentum, the Commission needs a small annual budget, because funds via fines against traffickers did not materialize,” she said in an email.

Most states have a commission or agency specializing in human trafficking. Twenty-six states have enacted legislation setting up commissions, while 13 others have them run by the attorney general or another executive branch agency, according to the National Conference of State Legislatures.