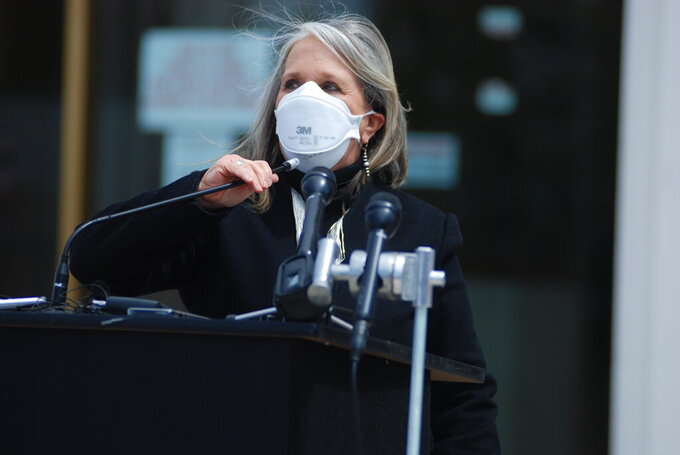 New Mexico Gov. Michelle Lujan Grisham announces her decision to sign a law that legalizes recreational marijuana outside the state Capitol building in Santa Fe, N.M., on Monday, April 12, 2021. The Democratic governor described the law as a victory for social justice and a potential boon for economic development. Her decision makes New Mexico the seventh state since last November to legalize adult possession and sales of cannabis for recreational use. The legislation gives the governor strong oversight through the governor's appointed superintendent of the Regulation and Licensing Department. (AP Photo/Morgan Lee)

SANTA FE, N.M. (AP) — A new estimate shows that successive rounds of federal economic relief since the outset of the coronavirus pandemic will deliver an estimated $18.9 billion in money and services to New Mexico.

The Legislature's budget and accountability office published the estimate Monday. The analysis will be presented in greater detail Thursday to members of the legislative finance committee.

The federal aid to one of the poorest states in the nation dwarfs the annual general fund spending of $7.4 billion by the New Mexico state government.

A $10.4 billion portion of that aid is traced to relief legislation approved in March 2020, often referred to as the CARES Act. The state government received $1.25 billion through the act, including $360 million that went toward local governments and tribes.

Relief signed by President Biden in March 2021 under the American Rescue Plan Act should bring another $7.1 billion to the state, including $2.6 billion in direct payments to individuals and $1.62 billion for state government.

It's unclear how the state will spend its portion after Gov. Michelle Lujan Grisham vetoed $1.1 billion in suggested spending by the Legislature.

Lujan Grisham is asserting her authority over the relief spending and awaiting guidance on permissible expenditures from the U.S. Treasury.

In addition to new federal relief efforts, Congress has expanded the federal share of spending on Medicaid health insurance for the poor, community development block grants and food subsidies for low-income families.