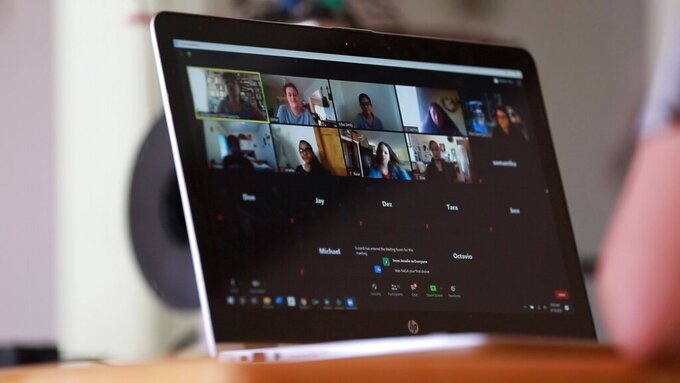 FILE - In this June 16, 2020, file photo, students and instructors at the STEM Santa Fe engineering camp gather on a video call as seen through the laptop of instructor Esther Lescht in her home in Santa Fe, N.M. New Mexico education officials are budgeting up to $10 million in pandemic relief money to create internships for high schools students, while nonprofits and school districts are bringing back summer enrichment opportunities to meet rising demand. As many as 2,600 students across New Mexico could participate in the internship program. according to the Public Education Department, which announced the program on Tuesday, May 18, 2021. (AP Photo/Cedar Attanasio, File)

SANTA FE, N.M. (AP) — New Mexico's top information technology official says a new $100 million state account for expanding access to high-speed internet is just a start and that investments of $1 billion are likely needed to modernize infrastructure, at a presentation to legislators on Thursday.

“They're scoping out those grants,” he said “We need to be up there, front and center, asking for the money."

Salazar said the consultant also looking at internet infrastructure programs in seven comparable states — including Colorado, Minnesota and Montana — for effective solutions. He says those states have some things in common with New Mexico in terms of geography and obligations to Native American communities.

The COVID-19 pandemic and a year-long pivot to online learning have exposed gaps in internet access across swaths of the state. Over 20% of students were left without internet at home at the start of the pandemic, and a state district court judge has directed the state to move quickly on improvements for pupils.

The Legislature and governor recently approved $133 million in spending to expand high-speed internet access during the coming fiscal year that starts July 1. They also called for the creation of a new state office dedicated to improving internet access, attached to the Department of Information Technology.

A nationwide search is underway for an administrator to guide New Mexico's expansion of high-speed internet, with an appointment expected in July.

Gov. Michelle Lujan Grisham expanded the search for a state director of broadband internet after vetting six candidates and holding a pair of interviews.

Salazar said the governor's office also is studying accelerated formats for expanding high-speed internet with the help of a retired Boeing engineering executive.

A space race is underway to provide internet services from networks of tiny, low-orbit satellites or floating high-altitude dirigibles. The technologies from competitors including SpaceX and Sceye might help states save time and avoid massive investments in underground cables leading to sparsely populated areas.