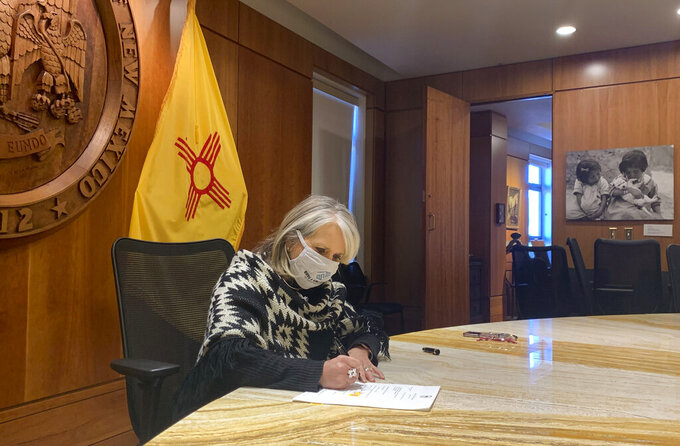 FILE - In this Nov. 25, 2020, file photo provided by the New Mexico Office of the Governor, Gov. Michelle Lujan Grisham signs a $330 million economic relief package aimed at helping small businesses and out-of-work New Mexicans while at the State Capitol in Santa Fe, N.M. From lockdowns in tribal communities to the economic and social fallout that has reverberated throughout New Mexico, the coronavirus pandemic dominated headlines in 2020. New Mexico had among the toughest public health restriction in the nation early on as Grisham called for the closure of gyms, salons and other businesses deemed nonessential. Public gatherings were banned, sports were cancelled, curbside became the norm, funerals were frowned upon and schools were forced to go virtual. (New Mexico Office of the Governor via AP, File)

The endorsements include major initiatives that have been championed by the governor in the past: the authorization and taxation of recreational cannabis, an effort to shore up abortion rights and a proposed constitutional amendment to tap more money for education from a multibillion-dollar state trust.

The ouster of several conservative Democratic senators in the 2020 primary elections increases the odds for those initiatives during the 60-day legislative session that begins on Tuesday. Constitutional amendments require a statewide vote but do not need the governor's signature.

On pandemic recovery and economic development issues, Lujan Grisham wants to provide a lifeline to restaurants by allowing alcohol delivery and broadening the state's tightly controlled monopoly on liquor licenses.

Lujan Grisham, a Democrat, also called for adjustments to a small business loan fund that was created in the midst of the pandemic — and received a lukewarm reception from businesses.

The governor's proposal to expand tuition-free college is back with a proposed $22 million allocation to “opportunity scholarships” for in-state students. The Legislature last year downsized the initiative, paying tuition and fees for associate and two-year college degrees only.

The governor also said she supports a bill that would crack down on predatory lending by lowering maximum interest rates for storefront loans.

On health care, the governor backs the creation of a health care affordability fund that would reduce insurance premiums for some people who buy policies on the federally subsidized exchange established under the Affordable Care Act.

Lujan Grisham also voiced support for a clean fuel standard to reduce greenhouse gas emissions from the transportation sector. The standard would apply to businesses that refine, blend, produce or import fuel — but not to retailers.

The governor is throwing her support behind preferences for minority-owned businesses and woman-owned businesses in state purchasing and service contracts — and reserving some procurement for in-state contractors.

A slate of policing reforms from legislators was not included on the governor’s top list of priorities.

Lujan Grisham spokeswoman Nora Meyers Sackett said Lujan Grisham as the legislative session progresses will support some additional initiatives that were not listed as top priorities.