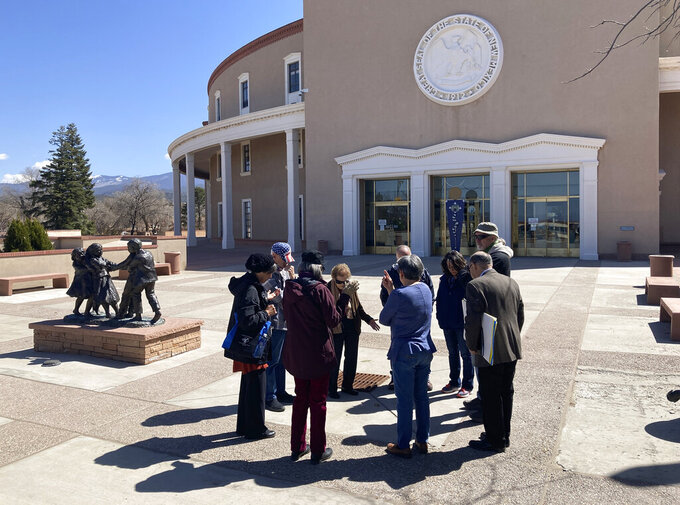 A Christian group prays that outside the state capitol building on Tuesday, March 30, 2021, in Santa Fe, New Mexico. Legislators met in a special session to revisit a sprawling set of marijuana legalization proposals that led to a deadlock during the regular session earlier in March. (AP Photo/Cedar Attanasio)

Legalization efforts stumbled during the annual legislative session that ended March 20, despite support from an array of proponents. Lujan Grisham has hailed the industry’s potential to create jobs and a stable new source of revenue for the state.

Lawmakers brought forward three bills that provide a regulatory framework for the industry, focus secondly on expungement proceedings for past marijuana convictions and finally approve spending on roadway safety and new court costs.

The proposed reforms would eliminate taxes on medical marijuana and impose an initial excise tax on recreational pot sales of 12% that would rise to 18% over time. That's on top of current gross receipts on sales that range from roughly 5% to 9%.

Possession of up to 2 ounces (57 grams) of marijuana would cease to be a crime, and people would be allowed six plants at home — or up to 12 per household.

“I think that the future of the country is that cannabis is going to be legalized nationally eventually. This will give our state the opportunity to be ahead of the curve and position itself,” said state Democratic Rep. Christine Chandler of Los Alamos, joining with Democratic allies to advance the proposed regulatory framework past its first committee hearing on an 8-4 vote. "Cannabis is being used now, and we have no idea of what they are smoking or eating or whatever if they are buying it from the illicit market.”

State oversight would largely fall to the governor-appointed superintendent of the Regulation and Licensing Department that would issue licenses for a fee to marijuana-related businesses.

Oversight bill sponsor Rep. Javier Martínez, D-Albuquerque, originally supported a free-market approach with unlimited sales and licenses. But he settled on a compromise from the Lujan Grisham administration that would place limits on cannabis cultivation. The provision expires at the end of 2025.

Medical marijuana producers are divided over how to proceed amid calls for new opportunity and competition in the market. Many fear unlimited business licenses and wide-open competition would undermine stable retail prices, financial investments and stable employment.

The bill from Martínez would create licensed “cannabis consumption areas” that might double as entertainment venues — and alleviate legal problems for marijuana users in federally subsidized housing or other circumstances where marijuana use is restricted.

"We strongly encourage this body to reconsider and abolish any cannabis consumption areas in the bill,” said Mahesh Sita, on behalf of the association.

Providing marijuana to children would remain a felony, and businesses that sell to people under 21 risk the suspension or revocation of licenses.

Deliberations among legislators began by videoconference, with only some lawmakers inside a Statehouse building that is closed to the public as a precaution against the coronavirus.

Outside, visiting tourist Dawn Plonkey of Arizona said she voted with the majority last year to legalize recreational marijuana in her home state in hopes of curbing the black market.

“I’m not a user, but I felt that it was going to be something that could benefit the state,” she said, comparing the criminalization of the drug to the failed 1920s prohibition of alcohol.

Virginia and New York are also on the cusp of legalizing marijuana through the legislative process.

New Mexico legislators in the Republican minority are calling the special session an inappropriate public expense in the midst of the pandemic — and an affront to Christians in the midst of Holy Week celebrations that precede Easter.

Republican Rep. James Strickler of Farmington said Tuesday that “a majority of New Mexicans are not that fired up about recreational marijuana.”

On the opposite side of the capitol Tuesday, members of a Christian group opposed to marijuana legislation stood in a circle, held hands and prayed that the efforts would fail.

“We will have a pot shop after pot shop,” Vazquez said. "We’ll see people stoned on Sunday morning, rather than in the pews.”