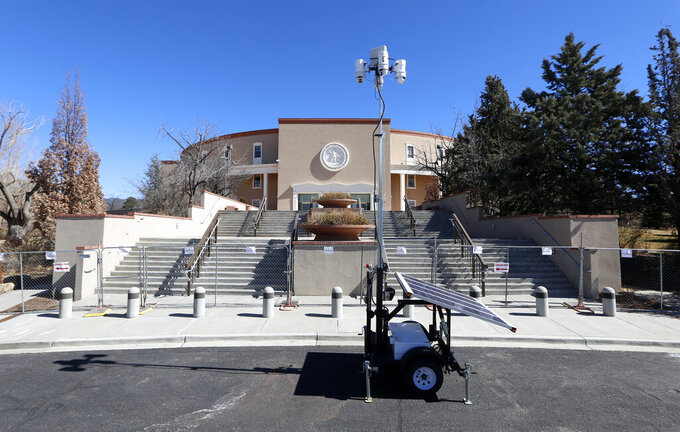 A fence is seen surrounding the State Capitol in Santa Fe, on Wednesday, Feb. 24, 2021. Republican lawmakers in New Mexico have asked that the state remove protective barriers erected around the state Capitol following the Jan. 6 insurrection in which supporters of former President Donald Trump broke into the U.S. Capitol building in an attempt to overturn the results of the presidential election. Republicans in the state legislature asked the Legislative Council on Tuesday to remove the fences around the facility, arguing that "the threat has not materialized." (Luis Sánchez Saturno/The New Mexican via AP)

The 29-13 Senate vote, with most Republicans in opposition, sent recent budget amendments to the House for consideration. The Legislature has until noon Saturday to send a state spending plan to Democratic Gov. Michelle Lujan Grisham, who can veto any and all budget appropriations.

The Senate proposal includes a 1.5% salary boost for public employees in state government and public schools.

The plan “invests in our teachers, in our economy, our educational system and our environment,” Senate finance committee chairman George Muñoz said. Financial reserves are expected to swell to $1.8 billion as a buffer against economic instability.

“This budget does a lot of good for a lot of people,” he said. “I think it’s unsustainable.”

Other Republicans used budget deliberations to highlight the the governor's spending on alcohol and gourmet food during the pandemic out of a discretionary fund for social obligations and diplomacy. An amendment to shrink the fund was voted down.

The budget bill takes into consideration $400 million in economic relief measures that provide a four-month tax holiday to restaurants, grants to business that lost income during the pandemic, and a $600 tax credit to low-income families.

Democratic state Sen. Antoinette Sedillo Lopez of Albuquerque urged Senate colleagues to provide a larger salary increase of 3% to public employees and ensure a “living wage” of $15 — in excess of city and statewide minimums.

“I think it is very disturbing, that we set a really poor example,” Sedillo Lopez said of low-end public wages.

The suggestions were rebuffed by Democratic legislators including Sen. Jacob Candelaria, who said low-income residents of New Mexico in the public and private sectors are set to receive a windfall of state and federal pandemic aid payments.

He accused Sedillo Lopez of morally shaming Democrats on the Senate floor in her bid for Congress in a June special election to succeed Deb Haaland, the newly confirmed U.S. Secretary of the Interior.

State spending on public education would increase by 5.8% to $3.35 billion, with increased taxpayer spending toward public school pension plans.

An additional $979 million in federal pandemic relief is expected to be distributed directly to public schools within the next three years.

Higher education funding to state colleges and universities increases 2.8% under the budget plan, from $841 million to $867 million. That includes $1 million to cover revenue shortfalls in university athletics programs due to the pandemic.

The state is using $1 billion in reserves to prop up general fund spending during the current fiscal year. But state income forecasts have rebounded on surging oil production and market prices for petroleum.

Authorized spending at the state Environment Department would increase by $2.3 million to $15.4 million.