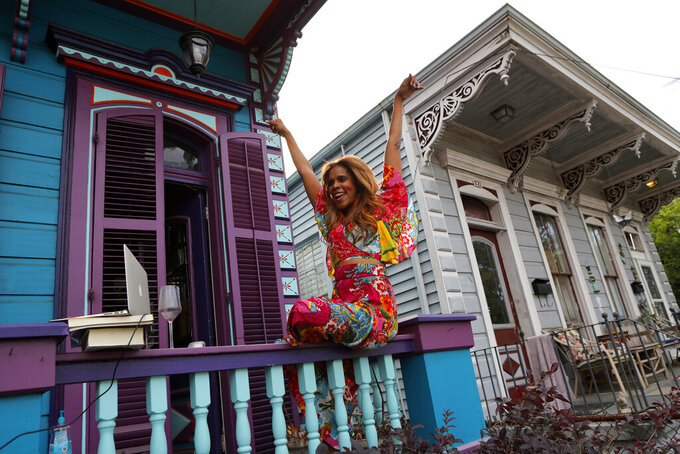 Anais St. John reacts after conducting a front porch concert at her home in New Orleans, Saturday, April 11, 2020. With New Orleans music venues shuttered for more than a month now because of the coronavirus outbreak, musicians and fans are finding new places to connect – porches, living rooms, studios and lawns – and reaching their largest audiences online, many streaming performances live on social media platforms. But for the city's club owners awaiting the green light to reopen there's concern about all the uncertainties, like how long it may take tourists to return, how soon the music scene will rebound and when it does, what it will look like. (AP Photo/Gerald Herbert)

NEW ORLEANS (AP) — On Saturday afternoons, pianist Harry Mayronne wheels a piano onto the front porch of the home of jazz singer Anais St. John for their weekly performance. The duo – spaced 6-feet apart – serenades a handful of friends and neighbors assembled on chairs on the sidewalk and a larger audience online.

For years, the two have performed intimate cabaret-style jazz numbers at the city’s swanky clubs and hotels. But now as the coronavirus has shuttered those venues, they and other musicians have been forced to find other outlets to both make ends meet and musically soothe a city that desperately needs it.

Few cities are as closely identified with music as New Orleans. It's heralded as the birthplace of jazz, and it's a rich melting pot of genres, from zydeco to hip-hop, from R&B to rock. It's a destination for vibrant live performances that can be heard from just about every corner of the city.

But the coronavirus and the social-distancing measures designed to fight it have nearly silenced its music scene. Bars and restaurants, where music could be blaring out until early morning hours, are closed. The numerous festivals held in the spring, which are an important money-maker for artists before the slow, hot summer months, have been canceled, such as this week's New Orleans Jazz Fest. The weekly second-line parades on Sundays featuring brass bands have stopped.

The young musicians making a name for themselves busking on the streets in the French Quarter are gone. Jazz funerals where mourners send off loved ones with a slow dirge and then an uplifting rendition of “When the Saints Go Marching In” are over.

Musicians have also fallen victim to the virus, most notably Ellis Marsalis Jr. The jazz pianist, longtime musical educator and patriarch of the Marsalis musical family, died April 1 after contracting the virus.

But the city's musicians are still finding ways to get the music out to the people. As the clubs and venues close, many artists are livestreaming from their porches, studios, living rooms, front lawns or wherever they can find space for safe distancing.

For Mayronne and St. John, the weekly performances sometimes have a theme. One week it was “Quarantina” featuring songs by Tina Turner. But other days, it’s simply a “porch performance,” as it’s billed on social media.

A handful of neighbors — many wearing masks — bring folding chairs to watch and listen from the sidewalk, careful to keep a safe distance from one another.

“It’s nice to just be able to walk around the corner, bring your wine and have a glass of wine with Anais,” said resident Penny Warriner, sitting across the street during a recent performance. People can also watch online and tip through Venmo and PayPal.

On Frenchman Street, the normally packed clubs like Snug Harbor or The Spotted Cat are quiet and their doors shuttered. The occasional pedestrian or bicyclist, some wearing face masks, goes up the street.

Inside the Maison lounge one recent Sunday, New Orleans rapper Mannie Fresh is playing DJ. He says into a microphone, “smile, today is a new day,” as he spins the Kirk Franklin gospel tune “I Smile” to an audience of thousands. Thousands, that is, online.

The club known for live acts such as the Brass-A-Holics and Big Easy Brawlers is shuttered. Fresh’s only physical audience is the club’s owner, Jeff Bromberger, and a handful of technicians streaming the performance to the outside world via Facebook, Instagram and Twitch.

“It’s just my way of uplifting people, and it’s uplifting for me as well,” Fresh said of his three-hour sets on Friday and Saturday nights and inspirational one-hour sets on Sundays.

“If you’re clapping your hands right now, put a thumbs-up sign to me or send me some prayer hands,” he says into the camera on his computer, browsing comment threads and giving shout-outs to fans.

They also provide some structure and “routine” as residents remain under a citywide stay-at-home mandate, he said.

“It’s not crazy to say that if you come from New Orleans, you party Friday, Saturday, and you go to church on Sunday,” he said. “So, that’s our normal routine.”

His audience has been growing each weekend, lately drawing some 10,000 to 20,000 viewers, Bromberger said: “It’s almost like medicine for people, because it’s a distraction.”

Waiting is a challenge for club owners like Bromberger, who owns the Maison and Dragon’s Den. He had just started gutting and building a new venue when the pandemic hit.

Bromberger said he’s concerned about the uncertainty of how much time it will take for the music scene to rebound and tourists to return. But he’s also worried about reopening only to have to close a second time if there’s a another wave of infections.

“I have no idea what the environment, what the market, what we’re even going to look like coming out of this, whenever that is,” he said. “I want to open up just like anyone else, but we’ve got to do it strategically and smart.”

For now, New Orleans artists are just grateful that fans are watching — and tipping — online or, for the lucky few who live close enough to catch one of St. John’s porch concerts, coming in person, from a safe distance, of course. She was scheduled to perform at this month’s French Quarter Festival, a free multi-day event during which area artists perform in various venues.