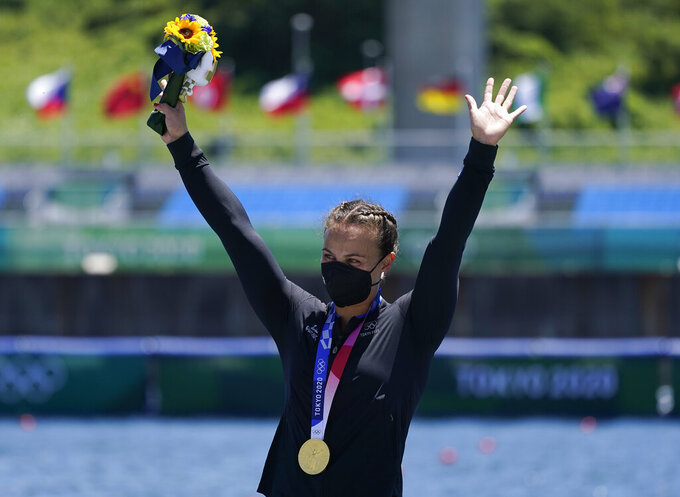 TOKYO (AP) — Lisa Carrington stood on a windy podium to accept her latest gold medal for a kayak sprint race she has dominated for more than a decade.

But any celebrations would have to wait. The New Zealander still had another one to win about an hour later.

Carrington opened her medal march at the Tokyo Games with a pair of victories Tuesday, first in the single 200, and then the double 500 with teammate Caitlin Regal, on the opening day of kayak and canoe sprint medal events.

Carrington came to Tokyo as a medal favorite in four events and the 32-year-old Kiwi made the first two look even easier than expected.

She got to open with the 200, an event she has owned at the Olympics and the world championships since 2012, and made a breeze of what could have been a physically and mentally punishing day in the heat, wind and choppy waves. Carrington had to race four times Tuesday in the semifinals and finals of both events.

“It was about the psychology, the mental approach. To do those four races today, it was a big ask,” Carrington said.

Her third consecutive Olympic gold medal in the 200 began with a bolt out of the start. She built a lead of half a boat length barely 50 meters into the race and cruised from there to beat Teresa Portela of Spain by 0.76 seconds. Portela's silver medal at the age of 39 was her first medal in six Olympics.

“She is one of the greatest. She showed us this today,” bronze medalist of Emma Aastrand Jorgensen said of Carrington. “I hope she will retire soon so we can be there as well, but I will keep fighting.”

Carrington and Regal were just as dominant in the 500, the last race of the day, and beat the silver-medal boat of Poland by nearly a full second. Carrington is scheduled race the 500 single and fours later this week.

New Zealand has been a power on the waters of the Sea Forest Waterway since the Olympics began. The Kiwis won five rowing medals, three gold, last week.

“It really made us excited to come here and do this water justice as well,” Regal said. “It’s pretty special."

Cuba's win in the men's canoe double 1,000 was the upset of the day. Germany had won the event at five of the previous seven Olympics and Sebastian Brendel had been in the German boat for gold medals in 2012 and 2016.

The race developed into a battle between Cuba and China over the final 500 meters. Cuban teammates Serguey Torres Madrigal and Fernando Dayan Jorge Enriquez edged across the line to win by 0.2 seconds.

“This moment, time stopped, time went so slow," Torres Madrigal said. “The pain is in the body but I tried to keep my mind clear to the finish.”

The Cuban duo had won silver at the world championships in 2019 but the country hadn’t earned a medal in this event at the Olympics since 2000. Germany won bronze to earn a medal in the event for the eighth consecutive Olympics.

“Conditions here were extreme. Really windy, really hot,” Brendel said. ”Unfortunately not a gold, but we’re happy with this bronze."

Hungary finished 1-2 in the men's kayak 1,000 as Balint Kopasz dominated the final 250 meters to pull away for the gold medal. Adam Varga finished second.

Kopasz came in as the reigning world champion and was locked in a tough battle with Fernando Pimenta of Portugal over the first 750 meters before his final push to the win. Varga edged Pimenta by 0.047 seconds at the finish for the silver medal.