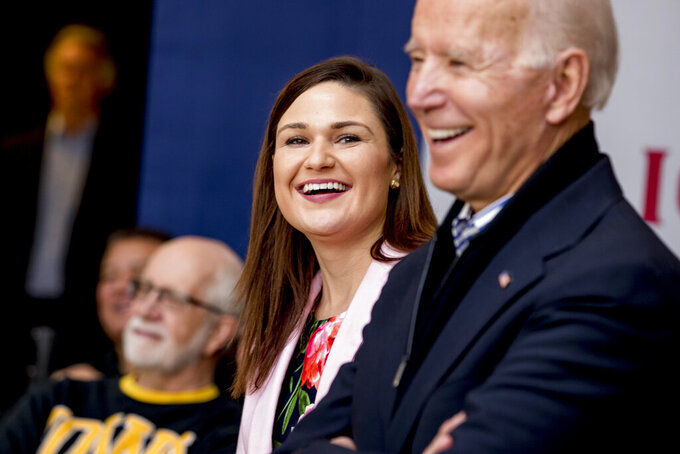 The Republican president and Democrat Joe Biden held events in Iowa in the days leading up to Tuesday’s election indicating what had appeared to be a tight race to carry the state in the presidential race.

Trump supporters who spoke to The Associated Press on Tuesday said their support was intended to reward Trump for keeping promises on the economy and immigration while giving being somewhat forgiving on his handling of the coronavirus pandemic.

Victor Litzi, 64, of Council Bluffs, who works for a vendor for the Iowa lottery, said he likes the economic path the country is on and his position on security.

“I’m voting for the president because I like the course we have been on,” he said. “I think he’s done a lot of things in the world that haven’t gotten noticed or acknowledged with the peace in the Middle East.

Ernst, who breezed to an easy win in 2014, won again but by a narrower margin against Democrat Theresa Greenfield, who heads a Des Moines property development company. The race had been among the most expensive in the nation, reflecting on its importance in determining if Republicans maintain their Senate majority.

The races for three of the state’s four U.S. House seats also were close.

In the 2nd District, Democrat Rita Hart and Republican Mariannette Miller-Meeks are running for a seat left open by the retirement of Democrat Dave Loebsack. It's the fourth time Miller-Meeks has run for the seat. She lost to Loebsack in 2008, 2010 and 2014.

Democratic Rep. Cindy Axne declared victory in the 3rd District against after Republican David Young conceded a loss. The Associated Press has not called the race. Young lost the seat to Axne in 2018 after two House terms.

Democrats had hoped to win a majority in the state House and break four years of GOP control of both chambers. Republicans, who had a 53-47 majority before Tuesday, claimed they had held all of their seats and picked up seven from Democrats, although the AP hasn't yet called those races.

Early voting has been gaining in popularity for years, and the movement was turbocharged this year by concerns about voting at polling places at a time when coronavirus cases continue to increase. Early voters broke earlier records a week before Election Day, with 64% of active Democratic voters and 42% of Republicans requesting an absentee ballot. In total, more than 950,000 ballots had been returned to election offices by Monday in a state with just over 2 million registered voters.

Although Democrats cast far more early votes, Republicans were expected to turn out strongly on Election Day. Many independent voters also will likely cast ballots in person since fewer than a quarter of them requested absentee ballots.