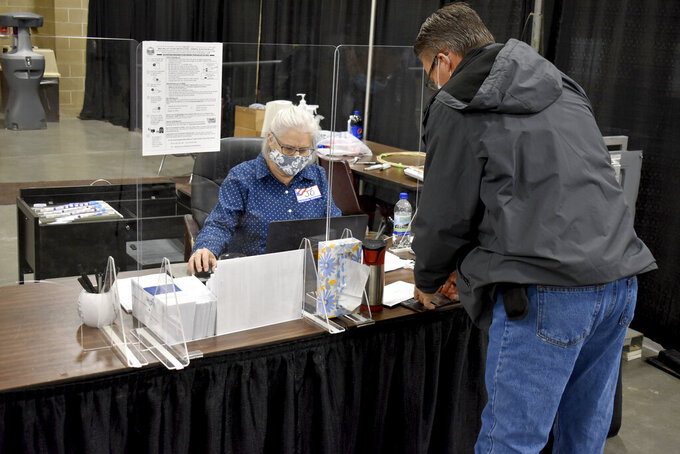 An election worker helps a voter with his ballot on Nov. 3, 2020 at the MetraPark events center in Billings, Mont. Montana voters were picking candidates for president, Senate, House, governor and other races. (AP Photo/Matthew Brown) 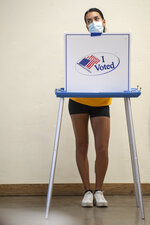 The sweep was completed by Greg Gianforte winning to become the state’s next governor and Matt Rosendale scoring a victory in the race for Montana's lone U.S. House race.

The results marked a resounding statement for the GOP in a series of competitive races and came despite Democrats sinking huge sums of cash into the contests.

The Republican domination came as the state reported a record number of ballots cast and some long lines at polling sites.

In-person voting was available in all counties but the number of polling stations was limited in many jurisdictions due to the coronavirus pandemic that has been surging in the state.

In Montana's most populous county, Yellowstone, dozens of people were already waiting when the polls opened in the morning. When the polls closed 13 hours later at 8 p.m., hundreds of people were still in line and county officials reassured them that they would still be able to vote.

“I want to be able to have my voice heard," said Holly Hayes, a stay-at-home mother from Laurel. Hayes described herself as an independent voter who cast her ballot for Democrats for statewide office, Republicans at the local level and Libertarian Party candidate Jo Jorgensen for president.

Trump defeated Democratic former Vice President Joe Biden to win Montana for the second consecutive election after winning the state by 20 percentage points in 2016. GOP officials in Montana who were initially lukewarm to the flamboyant former real estate developer have lined up reliably behind him ever since.

He campaigned repeatedly in the state in 2018 after taking a personal interest in toppling the state’s senior U.S. senator, Jon Tester.

Barack Obama and Biden lost Montana narrowly in the 2008 presidential election, and then by a wider margin in 2012. Analysts say Trump remains widely popular in the state but there have been signs that’s slipping, including Tester’s victory two years ago.

In the U.S. Senate race, Daines fended off a strong challenge from Gov. Steve Bullock.

Daines’ campaign leaned heavily on strong support in Montana for President Donald Trump. Daines warned that a Democratic takeover of the Senate would threaten gun rights and public safety.

Bullock and Democratic groups outspent Daines and his backers by a wide margin. They touted Bullock’s expansion of Medicaid prior to the pandemic and highlighted Daines' past votes against the Affordable Care Act.

Gianforte serves as Montana’s lone member of the U.S. House.

Rosendale first ran for U.S. House in 2014, losing the primary in a crowded field and narrowly lost his attempt to unseat Democrat U.S. Sen. Jon Tester in 2018. The former real estate developer hitched his campaign to President Donald Trump and stuck to the Republican party line, promising to protect the Second Amendment and end illegal immigration.

Williams focused her campaign on her career in environmental conservation, and the promise of improved health care and public lands protection. She ran for the seat two years ago and came within five points of victory. She would have been the first Democrat to win the seat in more than 20 years, and Montana’s first congresswoman since Jeannette Rankin won the seat in 1940.

Montana voters have passed ballot measures that will legalize, tax and regulate recreational marijuana for people over the age of 21, with sales starting in January 2022.

Supporters touted recreational marijuana as a way to raise revenue, allow military veterans to use marijuana for post-traumatic stress symptoms and reduce law enforcement costs involving the possession of small amounts of marijuana.

Opponents argued legalization would lead to increased drugged driving, more crime, and would not eliminate the black market because legal marijuana would be taxed at 20%.