Next up for banged-up Jets: 'Whoever's got a pulse' 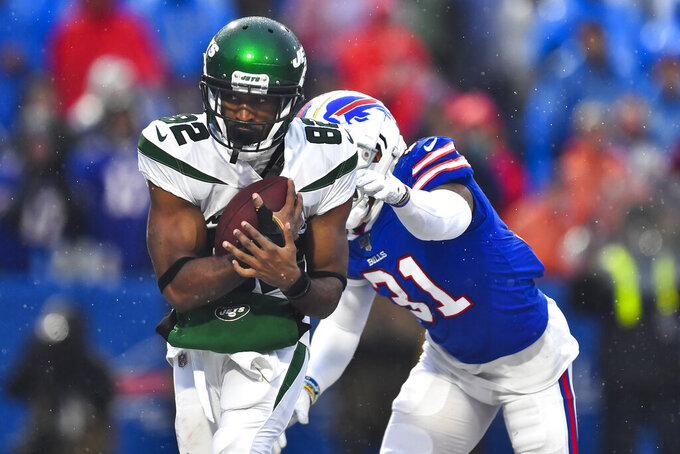 File-New York Jets wide receiver Jamison Crowder (82) catches a pass for a touchdown in front of Buffalo Bills' Dean Marlowe (31) during the second half of an NFL football game Sunday, Dec. 29, 2019, in Orchard Park, N.Y. New York Jets wide receivers Breshad Perriman and Crowder sat out practice Wednesday, Sept. 23, 2020, with injuries, and they could miss the team's game at Indianapolis on Sunday. (AP Photo/Adrian Kraus, File)

Or throw a block. Or last an entire game.

That's the state of things with the New York Jets right now, and it seems to get worse by the day.

A day after acknowledging that wide receiver Breshad Perriman likely won't play in either of the next two games because of an ankle injury, coach Adam Gase said Thursday it appears Jamison Crowder won't be ready to go at Indianapolis on Sunday. Neither practiced Wednesday or Thursday.

“You can common sense it if you want,” Gase said of Crowder's situation. “I’m just not going to close the door on him if, for some reason, he feels like he’s feeling a lot better in the next few days. But, I mean, I’d say it’s doubtful.”

That leaves Braxton Berrios and Josh Malone as the team's only fully healthy wide receivers. Undrafted rookie Lawrence Cager is an option to be elevated from the practice squad after flashing at times in training camp.

“His development is going to have to quicken up, I guess," Gase said of Cager. "I mean, we’re down to whoever's available, whoever's got a pulse right now, we're ready to go.”

The Jets also have D.J. Montgomery and Jaleel Scott on the practice squad.

Maybe Hines Ward, the team's wide receivers coach who hasn't played since 2011, still has a catch or two in him.

Starting right tackle George Fant suffered a concussion when he collided with a teammate in practice Wednesday — coincidentally after defensive players suggested that the team's preparation during the first two weeks was too slow — and might not be cleared in time to play the Colts. Chuma Edoga would start in his place if Fant can't go.

Center Connor McGovern has a strained groin, which occurred during the loss to San Francisco. He sat out a second straight day, and would be replaced by Josh Andrews if he can't play at Indy.

“He’s a veteran player and he can get a lot of work done just with his eyes and be able to apply it without actually going through a lot of practice reps,” Gase said of McGovern. “So, really to me, it’s about his movement skills, where’s he at on that. He might have to be an emergency guy. We’ve just got to kind of see how this all plays out.”

“If I would look at it as we’re the only team going through this, it’d be one thing, but when you look around the league you’re seeing guys going down left and right, whether it be in practice or games,” Gase said.

“And we’re having soft tissue things happen to us. It seems like some other guys have gone through like major, season-ending type injuries. You’re just hoping that this is one of those things of we’re either not hardened up enough, just because we’ve played two games and didn’t have a preseason. Maybe that’s part of the reason why, I’m not really sure.”

Gase said the training staff is gathering all the information it can to focus on preventing future soft tissue injuries.

“Right now, it just seems like we’re having one every week or we’re having a couple in a game,” Gase said. “So, we’re going to keep working to try to find the answer to it.”

One piece of good news was rookie running back La’Mical Perine practicing fully for the first time since spraining his left ankle during practice at MetLife Stadium on Aug. 30.

The fourth-round pick out of Florida made his NFL debut last Sunday, and gained 17 yards on three carries while 37-year-old Frank Gore had 21 attempts. Perine could be a bit more involved this week against the Colts now that he's fully healthy.

“We’re hoping to kind of really spread the workload out a little more to where we can make sure we do a good job of getting Frank through an entire game instead of kind of really burning him out in the first half," Gase said. “So, I feel good about kind of the rotation that we’re talking about going through. It’s just all about if we can keep everybody available for the whole game. That’s really what we want.”

NOTES: NT Steve McLendon did not practice after being excused for personal reasons on Wednesday. Gase said McLendon needs to go through COVID-19 testing before he's allowed again in the facility. He should be cleared in time to play. ... Gore also didn't practice, but it was his usual rest day.