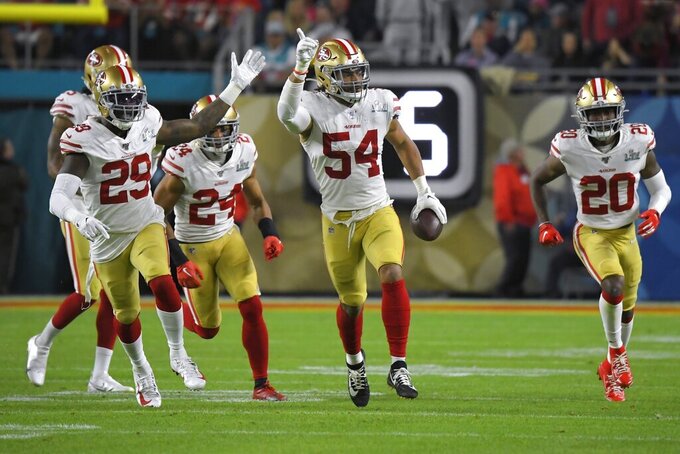 FILE - In this Sunday, Feb. 2, 2020, file photo, San Francisco 49ers' Fred Warner, center, celebrates his interception against the Kansas City Chiefs during the second half of the NFL Super Bowl 54 football game in Miami Gardens, Fla. The defending NFC champion Niners are returning 18 of 22 starters from a team that fell one quarter short of winning it all, the type of continuity that could be especially crucial during this virtual offseason. (AP Photo/Mark J. Terrill, File)

For all the focus on the big names that left San Francisco this offseason like longtime left tackle Joe Staley and defensive anchor DeForest Buckner, the reality is the 49ers will look much the same in 2020.

The defending NFC champion Niners are returning 18 of 22 starters from a team that fell one quarter short of winning it all, the type of continuity that could be especially crucial during this virtual offseason.

While many teams are trying to install new systems or get several new players up to speed while teams are spread out around the country during the COVID-19 pandemic, the 49ers are mostly intact.

“The continuity obviously is for sure an advantage,” linebacker Fred Warner said this week. “There’s a lot of turnover every year in the NFL because that’s just the nature of the business. Us having a lot of the same people in the building this year will be good for us, having that chemistry and being familiar with one another.”

The 49ers' ability to bring back so many key pieces began even before last season ended when defensive coordinator Robert Saleh was beaten out for the head coaching in Cleveland by Kevin Stefanski, ensuring that San Francisco wouldn’t have to replace a coordinator.

The biggest loss happened at the start of the league’s business season when Buckner was traded to Indianapolis for a first-round pick, leaving a void in the middle of the defensive line.

Receiver Emmanuel Sanders left for New Orleans early in free agency and right guard Mike Person was released, but every other starter is set to return, which is paying dividends already.

“It’s really important to have that continuity right now in these times because having everything the same for the veteran guys, the guys that have been part of the offense, defense, the special teams last year, all those installs are going to be the same or mostly the same,” left guard Laken Tomlinson said. “Coaches can really focus on coaching the rookies coming in and making sure they’re on the same page. The veterans can help with the learning process in that sense. Just having the majority of the team coming back, I think is going to be a winning edge for this team in this phase.”

The 49ers hope that kind of continuity can help them avoid the trap that has befallen so many other Super Bowl runners-up over the years.

Only three teams have bounced back from the disappointment of a loss in the title game to win it all the following year, with Dallas and Miami doing it in back-to-back seasons in 1971-72 and the New England Patriots in 2018.

Eight other Super Bowl losers returned to the game the next season only to lose again, including Buffalo three times. But 15 of the past 33 teams that lost in the Super Bowl failed to even make it back to the playoffs the following year, including the Los Angeles Rams this past season.

While many of those teams lost more pieces than the Niners, the ones that did leave San Francisco were big ones. Buckner was the leader of the team’s top position unit at defensive line with his relentless play.

“Losing him as a leader, we’ll have to figure out how to step up and fill that void,” defensive end Nick Bosa said. “He was the third down D-line play-caller, he was the hype speech guy, he was everything. ... We’ll have to step up.”

Sanders sparked the passing game when he arrived midway through last season, bringing out the best in quarterback Jimmy Garoppolo.

Staley had been a fixture at left tackle for more than a decade, bringing both experience and a high level of play before a neck injury ended his career.

But the Niners believe they found some capable replacements with first-round defensive tackle Jevon Kinlaw, first-round receiver Brandon Aiyuk and seven-time Pro Bowl left tackle Trent Williams, who was acquired in a draft-day trade from Washington.

Williams comes in with a level of familiarity, having played for coach Kyle Shanahan for four seasons in Washington. The rookies will have a harder time, although the process should be made easier because the veterans can offer plenty of help.

“A lot of onus does come on us and the coaching staff and everybody else involved,” Warner said. “We need to make sure they’re up to speed and have the right mindset heading into training camp when that time comes.”