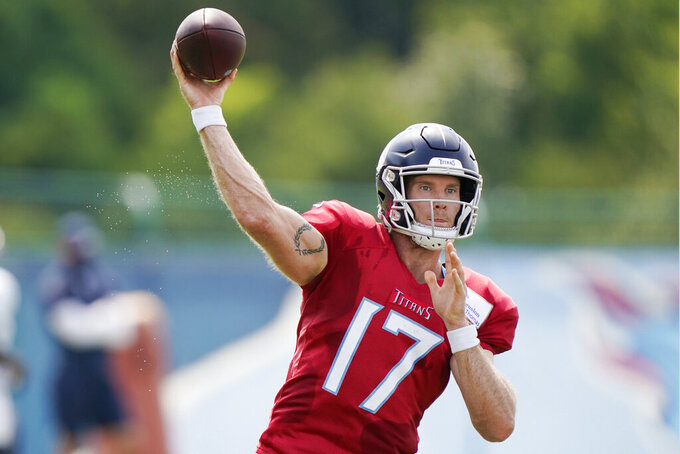 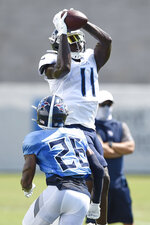 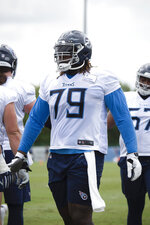 Then he got back to work along with many of his teammates.

Coming up one win short of reaching the Super Bowl is powerful inspiration.

“Having that opportunity to get to that last game, I think it definitely gave me even a bigger motivation because I know how to get there now,” Evans said.

The Titans turned around a 2-4 start with a quarterback switch and then Derrick Henry’s historic run through the playoffs in coach Mike Vrabel’s second season. Tennessee re-signed Ryan Tannehill to a new four-year, $118 million deal and used the franchise tag to keep the NFL’s rushing leader before signing him.

The franchise that lost 35-24 to Kansas City in the AFC title game returns 10 of 11 starters on offense but lost coordinator Dean Pees to retirement and traded away five-time Pro Bowl defensive lineman Jurrell Casey to Denver in March.

Now Vrabel and the Titans will try to build on that continuity.

“I’m part of a team that’s hungry for the playoffs,” left tackle Taylor Lewan said. “It’s hungry for getting one game farther than we did last year. It’s hungry for making more steps and strides, not just as individuals, but also from a whole team standpoint.”

Some things to know with the Titans:

Pees retired for the second and last time a day after the Titans lost to the Chiefs. Vrabel hired Jim Haslett, a former Saints and Rams head coach and defensive coordinator, as his inside linebackers coach. For months, Vrabel didn't say who would replace Pees calling defensive schemes on game day. But outside linebackers coach Shane Bowen will be calling plays with Vrabel's input.

The new starter on offense is expected to be veteran right tackle Dennis Kelly replacing Jack Conklin, who signed with Cleveland. The Titans also used their first-round draft pick on Isaiah Wilson out of Georgia. Kelly replaced Lewan when he was suspended the first four games of last season. The seven-year veteran has started 16 of 58 games with Tennessee, but the 6-foot-6, 350-pound Wilson was the 29th pick overall.

The Titans had an open spot on the offensive line last season. Nate Davis, the third-round pick out of Charlotte, started 12 games after moving into the starting lineup in October.

The Titans picked up the fifth-round option on cornerback Adoree’ Jackson but not for wide receiver Corey Davis — the fifth pick overall in 2017. Davis would have cost $15.6 million for 2021 under that option despite ranking second to rookie A.J. Brown with 43 catches for 601 yards last season. Davis has six TD catches and 1,867 yards receiving in three seasons.

The Titans had the NFL's worst field-goal unit last season making 44.4% of kicks. Greg Joseph was the fifth and final kicker last season, and his lone field goal attempt came in the AFC title game. He did make all 18 extra points in his five games. Undrafted free agent Tucker McCann of Missouri was signed to push Joseph, the kind of competition Tennessee didn’t have last season.

The Titans know Tannehill is their starter with his new contract. Now they need his backup with Logan Woodside the favorite despite his pro experience being all of eight games in the Alliance of American Football in 2019. He spent last season on the Titans’ practice squad with an injury, helping offensive coordinator Arthur Smith and charting plays on the sideline during games.

Tennessee cut seventh-round pick Cole McDonald out of Hawaii on Aug. 19 and signed Trevor Siemian with his 25 starts with Denver and the Jets for an experienced option.

Tennessee's top draft pick started training camp on the Reserve/COVID-19 list, then offensive tackle Isaiah Wilson got a warning from Tennessee State University police at an off-campus apartment Aug. 15. The police report said Wilson ran to a second-floor balcony and appeared to consider jumping before sitting back down.

"I’ve talked to him privately and continued to talk to the team and stress the importance of the decisions we make outside the building as it relates to the people we’re around because of COVID," Vrabel said.

The pandemic also ruins the Titans' chances of packing Nissan Stadium coming off a deep playoff run. No fans will be at the home opener Sept. 20 against Jacksonville.

“Fans or no fans you’ve got to go play, so that’s the mindset we have to have," Henry said. “We’re trying to go win football games. Like I said, adjust to the circumstances."