NFL betting lines in season of COVID-19 are moving targets 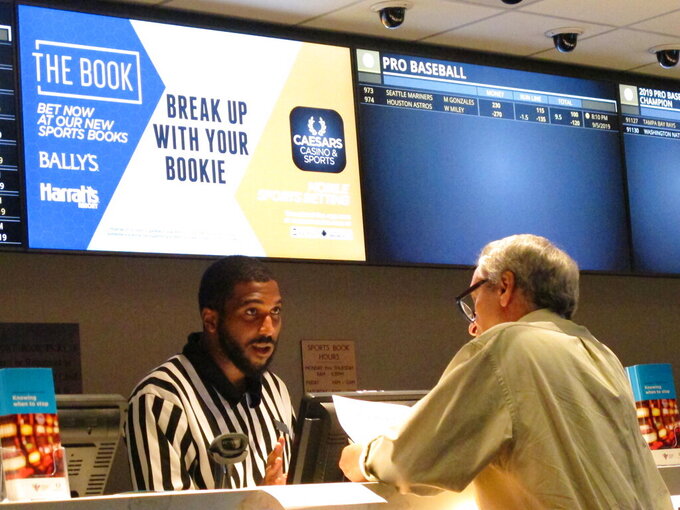 This Sept. 5, 2019 photo shows a gambler making a sports bet at Bally's casino in Atlantic City N.J. Participants in a national sports betting conference on Dec. 1, 2020, agreed that huge holes in state budgets due to the coronavirus outbreak, and the demonstrated eagerness of fans to bet on sports are likely to spur a further expansion of sports betting and online casino gambling in the U.S. (AP Photo/Wayne Parry)

ATLANTIC CITY, N.J. (AP) — Trevor Konitzer is the kind of guy whose cellphone is constantly buzzing with updates on NFL players: who's hurt, who's playing, what breaking news affects one team or another.

And then 2020 struck — again — in a way that's been creating havoc with the NFL's schedules, rosters and, most importantly to some, betting lines.

A coronavirus outbreak involving the Denver Broncos saw three of the team's quarterbacks deemed high-risk close contacts for having been mask-less around QB Jeff Driskel before he tested positive, making them ineligible to play in the upcoming game against the Saints.

He quickly placed a bet on New Orleans, knowing that a wide receiver recently elevated from Denver's practice squad was to start at quarterback.

It was some of the easiest money he ever made. Kendall Hinton completed 1 of 9 passes for 13 yards, and the Broncos lost 31-3.

It came during a week when what was to have been the marquee matchup of Thanksgiving night, the Ravens-Steelers game, was repeatedly pushed back due to multiple COVID-19 cases involving Baltimore, including reigning league MVP Lamar Jackson. That game was played six days later, with heavily favored Pittsburgh holding on for a 19-14 win.

The virus has been forcing postponements, knocking key players out of action and jumbling betting lines since Week 4 back in October.

“It's been pretty difficult,” said John Sheeran, director of trading for FanDuel. “We don't have all the information on who's going to play, but we do endeavor to have a line for every game.”

“The traders have to be more creative and apply their analytical skills to our lines more than ever before,” added Jay Croucher, head of trading for PointsBet. “This year, it's obviously more up in the air, particularly now that there are niche markets like player props.

“Denver loses all their quarterbacks, and now you have to set player props for Kendall Hinton,” he said. “It's really just calculated guesswork. We set his passing yards at 120.5; he ended up with 13.”

One trend that has become particularly noticeable this season: Gamblers seem to be waiting longer than ever to place their bets as they wait till the last possible moment to see who's playing and who isn't.

DraftKings' line on Broncos-Saints went from New Orleans giving up 5.5 points to 16.5 points.

“That's one of the largest moves I've ever seen,” said Johnny Avello, head of sportsbook for DraftKings. “You just don't see that in the NFL.”

The sportsbooks say they roll with the punches when developments pop up, just as the gamblers must do. FanDuel's Sheeran said oddsmakers apply the latest news to their “core calculations” for each team.

“Then you add the fact that Colt McCoy is playing quarterback (for New York) and is 7-21 as a starter in the NFL, the game is being played in Seattle, add in the travel factor for the Giants, the historical matchups, and you put that all in the pot and it gives us a number we think it should be.” (Seattle is favored by 11, up from 10 a few days ago).

The Steelers opened at -4.5 but went up to 10.5 with the cascading virus-related absences on Baltimore's part. (A late touchdown by the Ravens' third-string quarterback, Trace McSorley, gave Baltimore the cover).

The merry-go-round that is the NFL schedule will continue past this weekend: The Steelers and the Washington Football Team will play at 5 p.m. EST Monday, before the regularly scheduled Bills-49ers game that was moved to Arizona ( San Francisco having been ousted from its home by county health officials). And the Cowboys and Ravens will play a rare Tuesday night game.

All this uncertainty, however, is not affecting gamblers' eagerness to bet on NFL games. Sportsbooks uniformly say their overall handle is way up this season, as people look for forms of entertainment that don't involve going out.

And Konitzer, a 22-year-old bank employee from Green Bay, Wisconsin, won bets on both the Saints-Broncos and Ravens-Steelers games.