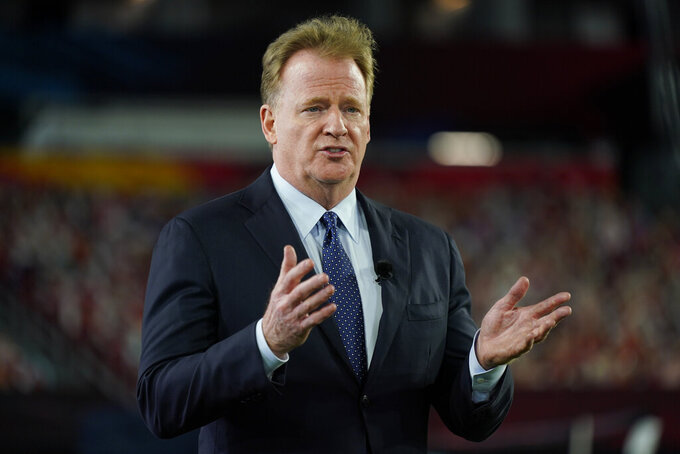 The NFL has plans to eliminate some restrictions from its current COVID-19 protocols for vaccinated players, coaches and personnel.

In a memo sent to the 32 teams Wednesday and obtained by The Associated Press, the league detailed potential amendments to the protocols used throughout the 2020 season and current offseason. Among the elements that could be eliminated are the need to participate in daily testing; quarantine periods due to close contact with an infected individual; and/or refraining from social gatherings among other vaccinated individuals.

“It is also anticipated that clubs that achieve a certain rate of vaccination among its tiered staff and players may be permitted to relax restrictions that apply to meetings, meal time and use of locker rooms,” the memo said.

On Tuesday, after the first of two days of virtual meetings among the team owners, Commissioner Roger Goodell noted the value of pursuing coronavirus vaccines.

“We will be encouraging all personnel to get vaccinated and working with the players association on all these issues,” Goodell said. "We are also using our platforms publicly to talk about the importance of getting vaccinations.”

Goodell also mentioned the hope that the 2021 season will be fully attended by fans. That would be subject to local COVID-19 rules and protocols.

“We’re discussing plans to welcome back all fans across the country at all stadiums,” he said. “All of us want to see every one of our fans back. Football is not the same without fans, and we expect to have full stadiums in the upcoming season.”

The league has given the teams permission to begin offseason programs on April 19. Most of those are voluntary, with the exception of mandatory minicamp in June.

However, NFL Players Association President JC Tretter argued again on Wednesday that the coronavirus-caused elimination of such things as organized team activities (OTAs) and minicamps did more good than harm in 2020.

“The good news for our sport is that while the NFL season looked and felt noticeably different from previous years,” the Cleveland Browns center posted on the union's website, “we learned that the game of football did not suffer at the expense of protecting its players more than ever before. Our process is to follow the science on what is safest for our guys, and many of the changes this past year – like no in-person offseason workouts/practices, the extended acclimation period before training camp and no preseason games – gave us a year of data that demonstrates maintaining some of these changes long term is in the best interest of the game.”

Tretter noted a 23% decrease in time missed for injuries, 30% reduction in concussions, drops in all categories of lower extremity strains and ACL tears within the five-year average, and a 45% decrease in heat-related illnesses.

“The regular season’s missed time injury rate fell within the normal range of the previous five years,” Tretter wrote. “That makes sense considering there weren’t substantive changes to our in-season practice and game-day schedules. Thanks to the new (offseason) acclimation period, however, training camp saw its lowest injury rate in that same time frame. And, with no in-person practices in April, May, or June of last year, our players were able to prepare for the football season while avoiding unnecessary injuries.”

Nothing is finalized regarding the spring and summer programs. In the NFL memo, the teams were told they “should be prepared to conduct meetings virtually, at least during the early phase of the program. As was expressed during (Tuesday’s) meeting, we do not anticipate a duplication of last season’s virtual workout program.”