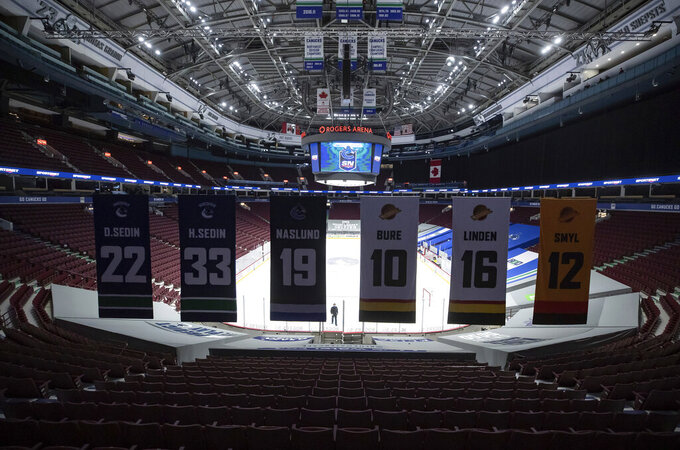 An arena worker removes the net from the ice after the Vancouver Canucks and Calgary Flames NHL hockey game was postponed due to a positive COVID-19 test result, in Vancouver, British Columbia, Wednesday, March 31, 2021. (Darryl Dyck/The Canadian Press via AP)

VANCOUVER, British Columbia (AP) — The National Hockey League’s deputy commissioner says the Vancouver Canucks’ COVID-19 outbreak is concerning, but he remains confident the team will be able to complete its schedule.

In an email to The Canadian Press on Monday, Bill Daly says the Canucks’ numbers are “concerning from a health and safety standpoint, not necessarily from a scheduling standpoint.”

Sixteen of the 22 players on the Canucks’ active roster were on the NHL’s protocol list as of Sunday. A player on the list has not necessarily tested positive, but any player who does test positive must self-isolate for 10 days. The list is updated every day.

The Canucks have had four games postponed because of the virus. Their next scheduled game is Thursday in Calgary against the Flames.

The Canucks and NHL have not commented publicly on results of tests since the Canucks confirmed Gaudette had tested positive last week.

The biggest previous COVID-19 outbreaks in the NHL were all in the U.S.

The Dallas Stars had their first four games postponed after 17 players tested positive, most of whom were asymptomatic.

The Canucks’ outbreak comes with the vaccine rollout going slower in Canada than in many states in the U.S.

“There’s two different countries, different rules, different situations,” Calgary Flames center Mikael Backlund said. “There’s nothing we can do about it really. We’ve just got to wait for our turn.”