NHL to host 2 outdoor games in Lake Tahoe this season 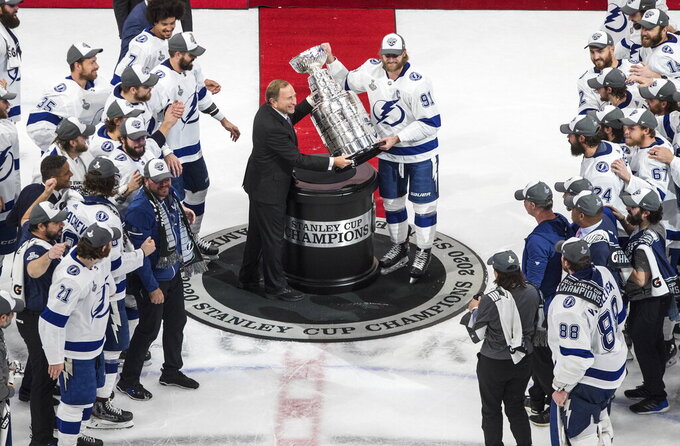 FILE - In this Sept. 28, 2020, file photo, Tampa Bay Lightning's Steven Stamkos (91) is presented the Stanley Cup from NHL commissioner Gary Bettman as they celebrate after defeating the Dallas Stars in the NHL Stanley Cup hockey finals in Edmonton, Alberta. The NHL is embarking on a 56-game regular season with all divisional play in a knock-down, drag-out battle for the Stanley Cup unlike any other in hockey history. (Jason Franson/The Canadian Press via AP, File)

The NHL played outdoors in the shadow of the Green Monster at Fenway Park, on consecutive days at Dodger Stadium and Yankee Stadium, and at Chicago's Soldier Field.

This year's outdoor games will be in a unique, picturesque setting: along the shores of Lake Tahoe.

The NHL announced Monday it will hold two games on an outdoor rink set up at Edgewood Golf Course in Stateline, Nevada.

Vegas will play Colorado on Feb. 20 and Boston faces Philadelphia on Feb. 21 on a temporary rink set up on the 18th hole at Edgewood, site of the annual American Century Championship celebrity golf tournament.

“We went to Tahoe, a very small group, and we were blown away by the setting, the blank canvas that it presents for us,” NHL chief content producer Steve Mayer said. “It’s hosted major events before. We felt very confident, especially in a short time frame, that we would be able to hold a world-class event and Tahoe will a great host. It was a pretty easy decision.”

The NHL is trying to navigate a season outside a bubble environment during the coronavirus pandemic and already has experienced what deputy commissioner Bill Daly called a “classic outbreak” within the Dallas Stars. With six players and two staffers testing positive for the virus, Dallas won’t play until Jan. 19 at the earliest, the league said.

“We’re still trying to get our arms around exactly how the spread occurred,” Daly said. “We think we’re at the end. We hope we’re at the end of that outbreak, and everybody is recovering nicely and being cared for and doing what they need to do to get healthy.”

The league doesn’t have a hard and fast rule on how many players it would take being unavailable to postpone a game. Each team has a taxi squad of four to six players this season to add to a roster of up to 23.

The NHL has been conducting outdoor games since 2003 and the two in the NHL Outdoors at Lake Tahoe event will be the 31st and 32nd in the series.

The league had been looking for new sites to play outdoor games and decided Lake Tahoe was a perfect fit. The area will provide dramatic views, with towering snow-capped mountains rising above the massive lake on the state line between California and Nevada.

The golf course offered plenty of space to set up a temporary rink and the resort at Edgewood allows the league to have a bubble-like environment.

No fans will be allowed to attend due to COVID-19 restrictions, but the visuals on TV and social media should be spectacular.

“We were looking for a picturesque, magnificent place with a lake and mountains that are snow covered,” NHL Commissioner Gary Bettman said. “Lake Tahoe fit the bill and we’re thrilled to be going there.”

“Lake Tahoe is one of the most beautiful areas in the world and a perfect spot for an outdoor game,” Colorado general manager Joe Sakic said in a statement. "Although we wish our great fans could be there in person, we know they will enjoy watching what will be a great weekend of hockey.”