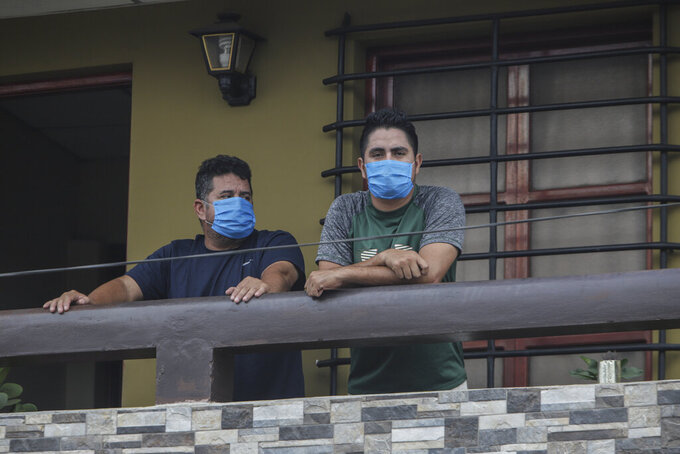 Norman Cardoze Sr., left, and his son Norman Cardoze Jr. pose for a photo from the balcony of their home where they are in quarantine after catching the new coronavirus in Managua, Nicaragua, Wednesday, May 27, 2020. During a May 16 game, manager Norman Cardoze Sr. and coach Carlos Aranda felt sick. Cardoze’s son Norman Jr., the team’s star slugger, was so weak and achy he didn’t play. Within two days all three men were hospitalized, where the Cardozes spent a week and Aranda died. (AP Photo/Alfredo Zuniga)

MANAGUA, Nicaragua (AP) — A Nicaraguan Hall of Fame baseball manager was fired Tuesday, days after publicly speaking about being hospitalized with COVID-19 along with his son and coach.

Norman Cardoze Sr., manager of the San Fernando Beasts, was not given a reason for his firing, but his wife Fátima Ruiz said the family suspects it was because they spoke out about being infected with the virus.

The government of President Daniel Ortega has continued to downplay the threat posed by the epidemic even as its toll has become more difficult to hide with more victims subjected to “express burials” and more medical personnel speaking out.

Ruiz said the family was “dejected” by the news.

“Norman is sick and this has shaken us more. Baseball is his life,” she said.

Cardoze Sr. had told The Associated Press about being hospitalized with his son and star slugger Norman Cardoze Jr. and coach Carlos Aranda in May. The Cardoze spent five days in the hospital and continue recuperating at home. Aranda was put on a ventilator at the hospital and later died.

Cardoze Sr. described the horror of watching people essentially suffocate before his eyes and seeing their bodies wrapped in plastic and removed. Nicaragua’s baseball league had suspended play following Aranda’s death and players’ refusal to take the field, initially until June 5 and then until June 26.

Players and coaches have spoken of being threatened to continue playing even as the illness spread through Nicaragua or risk two-year bans from the game.

The pro-government radio station Nueva Radio Ya quoted Cardoze Tuesday as saying, “I will be San Fernando until I die, but the front office just called me to say I was separated from the team.”

Even in the midst of the epidemic it appeared doctors were not protected from consequences for speaking publicly about the situation.

On Tuesday, at least 11 doctors were fired from the public hospitals, apparently for signing a letter demanding personal protective equipment, said Róger Pasquier, director of the Nicaraguan Medical Association.

“They want to leave the hospitals without doctors in the middle of the pandemic,” Pasquier said.

One of those let go, anesthesiologist Marianela Escoto, said in a video circulated on social media that “there is no just cause,” that her performance had never even been called into question.

Anesthesiologist Fernando Rojas said in an interview with 100% Noticias that his firing was “unjustified” and the only reason was “for not agreeing with this criminal regime.”

The Health Ministry has not commented on the firings.

The Pan-American Health Organization urged the government to protect medical personnel as they battle the epidemic.

Asked about the firings, Ciro Ugarte, the organization’s director of emergencies, said “those people who defend the health and lives of people must be protected.”

The government updated its epidemic data Tuesday to 1,464 confirmed infections and 55 deaths. Both are considered to be substantial undercounts. The non-governmental Citizen Observatory had reported through Friday more than 5,000 infections and 1,114 deaths for pneumonia and suspected COVID-19.