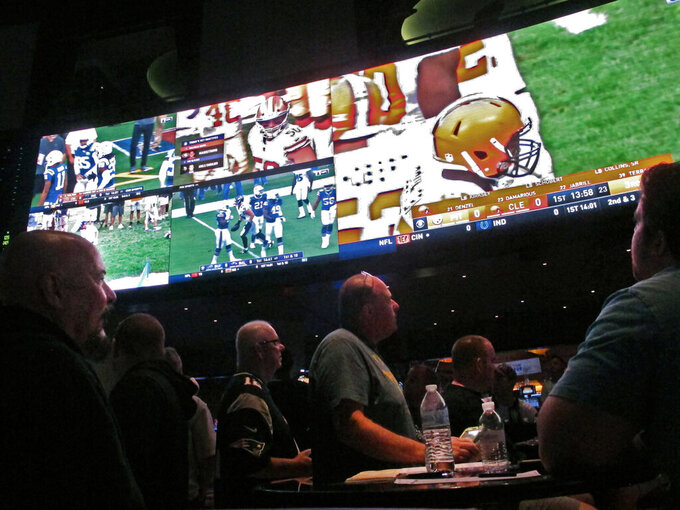 FILE — In this Sept. 9, 2018 file photo, customers watch an NFL game in a sports betting lounge, in Atlantic City, N.J. New Jersey's top gambling regulator is threatening to fine sports books operating in his state that ask customers to cancel requests to cash out money from their accounts, saying the practice is ongoing and "unacceptable."(AP Photo/Wayne Parry, File)

ATLANTIC CITY, N.J. (AP) — New Jersey's top gambling regulator is threatening to fine sports books operating in his state that ask customers to cancel requests to cash out money from their accounts, saying the practice is ongoing and “unacceptable.”

In some cases, sports books have offered to give players cash bonuses if they cancel withdrawal requests, according to David Rebuck, director of the New Jersey Division of Gaming Enforcement.

In a letter posted Wednesday to the division's website, Rebuck did not name the sports books who have engaged in this practice, nor did he say how many complaints the division has received of such activity.

But he wrote that trying to talk customers out of withdrawing funds from their accounts violates numerous state rules.

“Patrons who request withdrawals have the right to receive their funds as expeditiously as possible," he wrote. "Operators should clearly understand that the Division will take regulatory action and impose civil penalties whenever patrons are improperly encouraged or incentivized to rescind their withdrawal requests for the purpose of resuming gaming activity.”

New Jersey has become the national leader in sports betting in the U.S., taking more than $6 billion worth of such wagers last year. In December, its casinos and horse tracks took nearly $1 billion in sports bets, setting the latest in a string of national records for the most money wagered on sports in a single month.

Its regulatory structure is considered to be among the most stringent in the nation, and has served as a model for numerous other states as they adopted their own sports betting legislation over the past three years.

Still, the head of the Stop Predatory Gambling organization on Friday accused the New Jersey attorney general's office, which oversees the DGE, of “moral hypocrisy” for launching high-profile litigation against the opioid industry, while treating sports books with much more leniency.

“This is a naked attempt by online gambling operators to get citizens to lose more money,” said Les Bernal, the group's director. “What New Jersey should be doing is suspending and fining them, not just some long-winded letter threatening future action.”

The attorney general's office did not immediately respond to a request for comment.

This kind of activity is not limited to New Jersey. The United Kingdom's Gambling Commission recently ordered its licensees to stop “reverse withdrawal options" until further notice out of concern over gamblers who may engage in excessive betting during coronavirus lockdowns.

New Jersey regulations do not require withdrawals to be processed immediately; an unspecified amount of time can be taken to verify a customer's identity and investigate any fraud or money laundering concerns.

But as soon as those concerns have been laid to rest, the customer must be given his or her money without further delay, officials said.

He said such an offer of bonus money would be considered “an aggravating factor” in any disciplinary action against a sports book.

“Our automated payout system protects our players by enabling them to cash out quickly so they don’t otherwise cancel their payout requests and continue gambling with their winnings,” he said.