NJ gambling revenue flat in February, even with Super Bowl 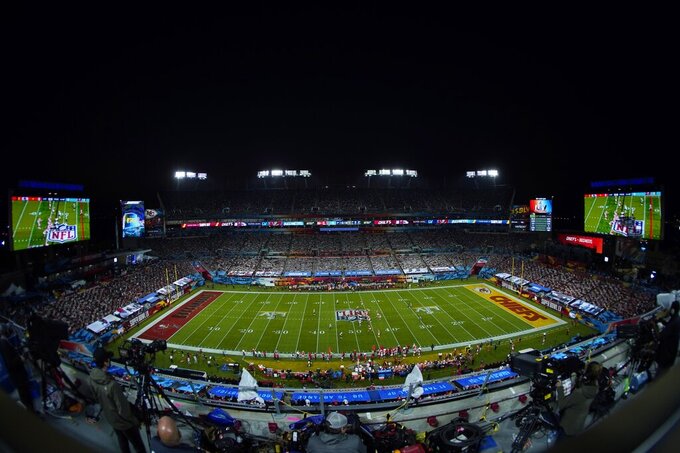 FILE - In this Feb. 7, 2021 file photo, the Kansas City Chiefs play the Tampa Bay Buccaneers during the first half of the NFL Super Bowl 55 football game in Tampa, Fla. Despite the Super Bowl, New Jersey’s casinos and racetracks took in $200 million less in sports bets in February than they did a month earlier. Figures released Tuesday, March 16, by state regulators show the gambling outlets handled nearly $743 million worth of sports bets in February. (AP Photo/Charlie Riedel, File)

ATLANTIC CITY, N.J. (AP) — Despite a highly anticipated Super Bowl, New Jersey's casinos and racetracks took in over $200 million less in sports bets in February than they did a month earlier, state gambling regulators said Tuesday.

Figures released by the state Division of Gaming Enforcement show the gambling outlets handled nearly $743 million worth of sports bets in February, down from the more than $996 million they handled in January.

But February's sports betting numbers were still about $200 million higher than they were in February 2020. That, combined with continued strong performance from internet gambling, which was up over 80% from a year ago, helped the casinos and tracks barely exceed the total amount they took in last February.

Business done in person at casinos was down over 32% in February compared with a year ago, when casino closures had not yet happened.

The numbers were released on the anniversary of New Jersey Gov. Phil Murphy shutting down the casinos due to the coronavirus pandemic. They remained closed until early July 2020, and still operate under capacity restrictions.

“Casino win could not compare to the pre-pandemic results of last year, before restrictions on capacity, amenities, and entertainment were implemented,” said James Plousis, chair of the state Casino Control Commission. “Governor Murphy’s order that increases indoor casino occupancy to 50% later this week will help speed the casinos’ recovery. Atlantic City has been successful minimizing risk to visitors during the pandemic, and it is ready to move forward safely.”

The casinos and tracks kept over $46 million of the sports bets they handled in February, up from just $17 million a year ago.

Two other casinos recently changed their financial reporting due to a sale (Bally's) or the splitting off of an internet gambling arm (Golden Nugget).

A report released Tuesday by the Lloyd D. Levenson Institute for Gaming, Hospitality and Tourism at Stockton University quantified some of the impacts of the coronavirus pandemic on Atlantic City's gambling industry.

It found that casino revenue from slots, table games, poker and in-person sports books declined by over 48% from last February through this one, but online gambling and sports betting revenue soared by nearly 92% over that same period as many customers were quarantining or avoiding casinos even after they reopened in the summer.

Before the pandemic, online betting accounted for roughly 20% of gaming revenues, but has since grown to nearly 47%.

The Stockton report also attempted to assess visitation levels to Atlantic City during the pandemic, finding that the number of cars entering the city on the Atlantic City Expressway declined by 33% from January 2020 through January 2021. During that same period, passenger counts at Atlantic City International Airport were down almost 60%.

And nearly 600,000 fewer people attended meetings and conventions in Atlantic City from March 2020 through February 2021 than in the prior 12-month period. This resulted in almost $260 million less in attendee spending, a 90% reduction year-over-year.