No. 10 Indiana seeks to earn rare win over No. 18 Wisconsin 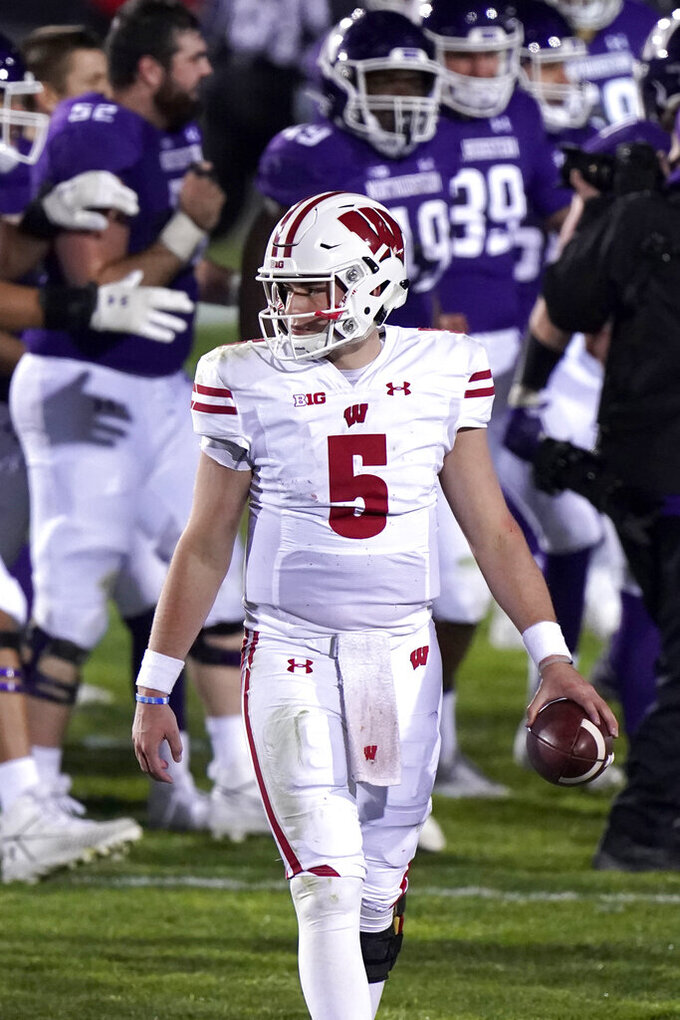 A victory would give Indiana six Big Ten victories this year to tie the school record set in 1967 and 1987. Wisconsin will try to beat Indiana for an 11th straight time to extend what is currently tied for the third-longest active winning streak in any Big Ten series. The only longer active streaks are Ohio State’s 25 straight victories over Indiana and Wisconsin’s 15 consecutive wins over Purdue. Ohio State has beaten Minnesota 10 straight times.

Wisconsin QB Graham Mertz vs. Indiana's pass defense: Mertz was outstanding in Wisconsin’s first two games and then threw three interceptions and lost a fumble in a 17-7 loss at Northwestern. Indiana has intercepted 16 passes this season to lead all Football Bowl Subdivision teams.

Indiana: QB Jack Tuttle: The Utah transfer will make his first career start Saturday now that a torn anterior cruciate ligament has sidelined Michael Penix Jr. for the rest of the season. Tuttle took over for the injured Penix and went 5 of 5 for 31 yards with a two-point conversion pass in a 27-11 victory over Maryland last week.

Wisconsin: RB Jalen Berger: The true freshman didn’t play in a season-opening victory over Illinois but has come on strong since. Berger rushed for 87 yards and a touchdown against Michigan, and he followed that up by running for 93 yards against Northwestern. He’s averaging exactly 6 yards per carry.

This is only Wisconsin’s third game of the season due to the pandemic. Wisconsin’s COVID-19 outbreak caused the Badgers to cancel games with Nebraska and Purdue. The Badgers’ scheduled game with Minnesota was scrapped due to COVID-19 cases within the Gophers’ program. … Indiana is seeking its third victory over a ranked team this season, which would match the program single-season record set in 1945. … This is the third straight year that Penix has been unable to finish a season due to injury. … Indiana RB Stevie Scott III scored a career-high three touchdowns against Maryland. … Wisconsin’s defense is allowing the fewest yards per game (233.3) and third-fewest points per game (11.7) of any FBS team.