No. 11 Auburn banking on Nix, successful overhaul on lines 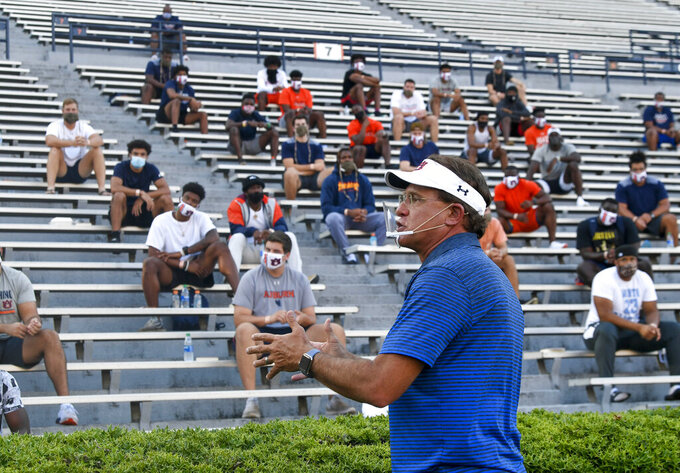 Auburn coach Gus Malzahn talks to players during the first team meeting of the season for the NCAA college football team, Sunday, Aug. 16, 2020, in Auburn, Ala. (AP Photo/Todd Van Emst via AP)

The Auburn Tigers have played for a Southeastern Conference championship, knocked rival Alabama from playoff contention and had a losing league mark.

The Tigers' last three seasons have been eventful in a Western Division where it's awfully hard to break through. Now, they have quarterback Bo Nix back from a promising freshman season with a new offensive coordinator and a dangerous wide receiver in Seth Williams.

Taking that next step from a nine-win season that included a thrilling win over Alabama will require more than just a more seasoned Nix and fresh play calling. It will takes a major replenishing of big men on both sides of the ball.

The Tigers, who are ranked No. 11 in the preseason AP Top 25 poll, lost all five primary offensive line starters from last season, though center Nick Brahms started five games each of the past two seasons. The defensive line must replace top 10 NFL draft pick Derrick Brown in the middle and end Marlon Davidson, a second-rounder.

The secondary will require a similar overhaul having to replace four starters, including a first-round pick in cornerback Noah Igniboghene.

The defense is led by linebackers KJ Britt, Owen Pappoe and Zakoby McClain.

There’s little question about the offensive leader this season. Nix completed a modest 57.6% of his passes but didn't throw an interception in the last five games.

“He’s very confident,” Malzahn said of Nix. “There’s no doubt about that. I can tell that he’s started to feel like it’s more of his team, which that’s natural progression for a true freshman that starts.”

Malzahn reclaimed playcalling duties last season with mixed results but handed the reins to a longtime friend. Morris, a former head coach at Arkansas and SMU, had considerable success as Clemson’s offensive coordinator.

Morris and Auburn, however, didn't get a single practice during the spring because of the coronavirus pandemic.

With leading rusher JaTarvious Whitlow having left the team, Auburn will likely turn to D.J. Williams or top freshman recruit Tank Bigsby to lead the running game. Williams ran for 400 yards and two touchdowns as a freshman last season. Redshirt freshman Mark-Antony Richards also could be in the mix.

If there was a position that most needed a spring to sort things out, it's the offensive line under new position coach Jack Bicknell Jr. Brahms and juniors Austin Troxell and Brodarious Hamms seem likely starters, and Auburn signed five offensive linemen including two junior college transfers.

Auburn had to cancel several practices in late August after nine players tested positive for COVID-19. With contact tracing, that meant 16 players had to be held out four weeks before the season opener. Malzahn said two unspecified position groups were particularly left short-handed. Several Auburn players have opted to sit out the season, including backup linebacker Chandler Wooten.

Auburn added a road game against South Carolina Oct. 17 and a home game against No. 25 Tennessee Nov. 21. Gone are Alcorn State, No. 18 North Carolina, Southern Miss and Massachusetts.

“Playing two extra (league) games won’t be a shock to our system,” Malzahn said. “I think we’ve had the toughest schedule since 2013. We’re really looking at that as an advantage.”