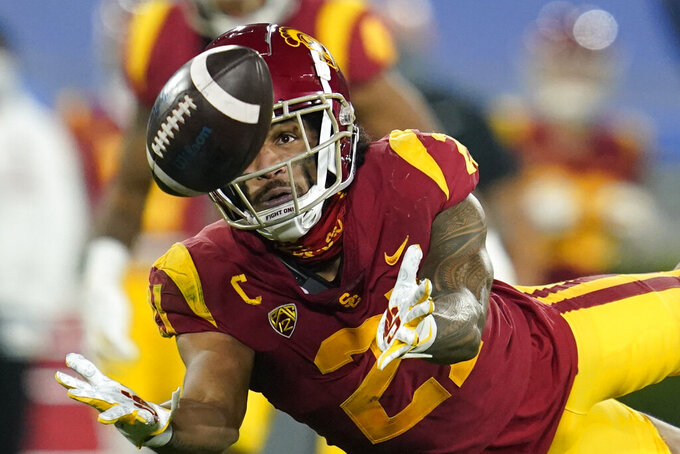 Only the Pac-12 wasn't totally sure who the Trojans (5-0) would play in that game Friday night, so they would have to prepare for two — or maybe three — opponents.

Oh, and they would also have to do it on their second consecutive short week of short rest.

USC's opponent was Washington for about 36 hours, only to become Oregon on Monday when the Huskies determined they had too many COVID-19 cases in a critical position group.

The Trojans' coaching staff wasted time preparing for the Huskies only to switch to the Ducks (3-2), who didn't play last week and could have started preparing for this likely eventuality some time ago, since their scheduled game against Washington last weekend was canceled for the same reason.

The Trojans are taking this bizarre chapter in a singular regular season in stride, knowing a major bowl game awaits if they can overcome one more challenge at the Coliseum.

“We control what we control, and that’s us,” USC coach Clay Helton said Monday morning before the Pac-12 changed the matchup.

The Pac-12 announced USC would face Washington right before the fourth quarter of the Trojans' 43-38 comeback victory over UCLA last Saturday night. The conference made the decision knowing the Huskies might not be able to play, and those fears were confirmed Monday.

So while the Trojans knew their opponent, they also knew there was a decent chance it would change. Helton decided his coaches and players would prepare for Washington during the day, but the coaches would put together a game plan for Oregon at night this week.

As it turned out, the Trojans could make the switch a few hours early.

“Definitely makes things difficult,” offensive coordinator Graham Harrell said. “It’s just the situation we’re in, unfortunately. I think you’ve just got to do your best. The good thing for us is a lot of times, especially offensively, we just do what we do. At least offensively, it gives you a chance in a situation like this. ... If we just have to go in there with a very generic game plan and go execute, we’ll do it.”

The coronavirus-shortened season has tested all college football coaches' preparation skills, and Helton believes USC has already faced a similarly daunting challenge this season: All of the Trojans' first three opponents — Arizona State, Arizona and Utah — were playing their season openers, which meant USC had no game video to study.

“Not knowing who we’re going to play, I think our coaches make it easy on us," USC receiver Amon-Ra St. Brown said. "I think it’s harder on them than it is on us. They’re making the game plan, doing all the hard work. If we listen to our coaches and go out there and do what they say, I think we’ll be fine.”

The Trojans' offense will do what it does, but it might have to do it without its leading rusher. Vavae Malepeai, who rushed for 110 yards and a touchdown against UCLA, sprained his knee late in the game at the Rose Bowl.

USC is deep at tailback, with Markese Stepp, Stephen Carr and Kenan Christon all ready for more carries.

The Trojans have overcome every bizarre challenge of this year to complete the school's first unbeaten regular season since 2005, when Pete Carroll and Heisman Trophy winners Reggie Bush and Matt Leinart lost an unforgettable national championship game to Texas.

This season almost certainly won't end in the College Football Playoff, but USC could be headed to the Fiesta Bowl if it can get past Oregon at the Coliseum. Most of the current Trojans weren't around for their last Pac-12 title in 2017, and they would love to raise a trophy under any circumstances.

“Having come from not having a season at all to being in the Pac-12 championship is awesome,” St. Brown said.