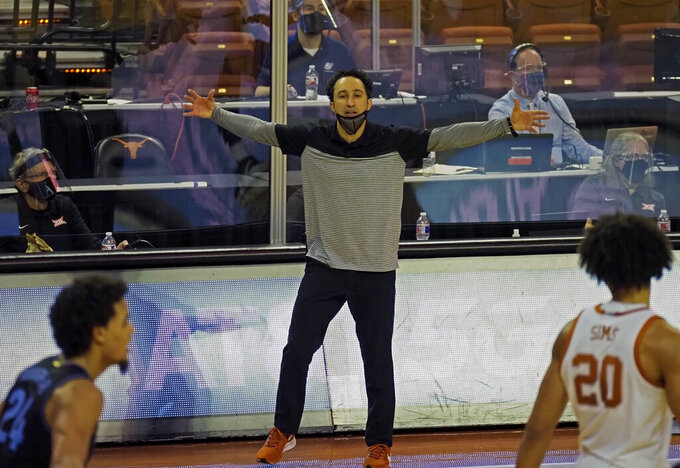 WACO, Texas (AP) — No. 2 Baylor has paused team activities because of COVID-19 issues, leading to another high-profile game getting nixed for the Bears.

The Bears were scheduled to play their Big 12 opener Sunday against No. 13 Texas, but Baylor coach Scott Drew announced the pause in team activities Saturday. Baylor's scheduled game Tuesday night against Tarleton State, added just last week, has also been postponed and the status of a Dec. 19 game at Kansas State is still to be determined.

Both the Texas and Tarleton State games could be rescheduled.

“This is a disappointing time for everyone involved with our program, but we will always prioritize the health and safety of our student-athletes,” Drew said. “The Big 12 Conference prepared for this possibility by leaving the final week of the regular season open, and we look forward to hosting Texas at a later date. Our program will return to competition as soon as we can do so safely.”

Drew missed the team's first two games after testing positive for COVID-19, though at the time his was the first positive test in the program in 12 weeks. He returned for the Bears' win over No. 6 Illinois on Dec. 2.

The school didn't provide any additional details on what led the pause Saturday.

Baylor (4-0), the preseason Big 12 favorite, has now played only one of the first seven games as listed on its original schedule.

The Bears last weekend had their highly anticipated showdown against No. 1 Gonzaga in Indianapolis called off about 90 minutes before tipoff. A Bulldogs player was among two people in their traveling party tested positive for COVID-19.

Then Baylor's scheduled homer opener this week was pushed back a day, and the opponent changed, after Nicholls State canceled because of virus issues and replaced on the schedule by Stephen F. Austin.

Texas (5-1) won the Maui Invitational, which was played in North Carolina, before its first loss was 68-64 last Sunday at home to No. 9 Villanova. The Longhorns' 4-0 start was the program’s best start in six years under coach Shaka Smart, who just last season was under intense pressure and speculation he could lose his job.

The Longhorns are scheduled to play at home against Sam Houston State on Wednesday.