No. 2 Notre Dame, No. 25 UNC meet in ACC headliner this week 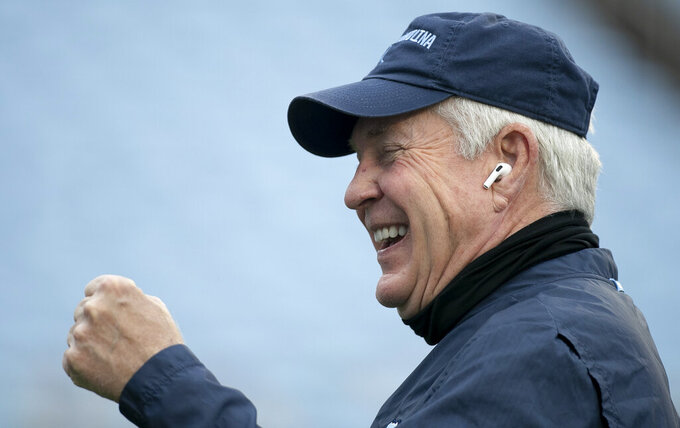 FILE- In this Oct. 10, 2020, file photo, North Carolina head coach Mack Brown laughs with the television crew as he prepares to do an interview prior to the Tar Heels' NCAA college football game against Virginia Tech at Kenan Stadium in Chapel Hill, N.C. Brown's 25th-ranked Tar Heels host No. 2 Notre Dame on Friday. (Robert Willett/The News & Observer via AP)

Here are things to watch in the Atlantic Coast Conference in Week 12:

No. 2 Notre Dame at No. 25 North Carolina. Brian Kelly's Fighting Irish (8-0, 7-0 ACC) face their toughest remaining hurdle in their march toward the ACC championship game with Friday’s trip to face the Tar Heels (6-2, 6-2). Both teams had an open date last week. Notre Dame followed its win against then-No. 1 Clemson by beating Boston College on Nov. 14, while UNC — which peaked at No. 5 in the AP Top 25 in October — rallied from 21 down after halftime to beat Wake Forest that day. The Fighting Irish have won 14 straight games dating to last season, while all eight of the Tar Heels’ losses since Mack Brown began his second stint last season leading the program have come by seven or fewer points.

The battle between the Fighting Irish’s top-tier defense and the Tar Heels’ high-powered offense offers one of the most compelling matchups in the country. Notre Dame ranks fourth in rushing defense (85.1 yards allowed), ninth in total defense (304.1 yards per game) and 11th in scoring defense (16.6). But UNC has proven just as capable of big plays through the air with quarterback Sam Howell or on the ground with Javonte Williams and Michael Carter. The Tar Heels are fourth nationally in total offense (563.4) and 10th in scoring (43.1).

The coronavirus pandemic continues to shake up the ACC schedule. The league had played 69 of 78 scheduled games through last weekend. But last weekend also saw the cancellation of the Duke-Wake Forest due to positive tests, quarantines through contact tracing and injuries for the Demon Deacons. That marked the first time the instate programs haven’t met since the 1966 season. There was also the last-minute decision to postpone the game between No. 4 Clemson and Florida State, a move that irked Tigers coach Dabo Swinney and could mark the first time those teams don't play since FSU joined the ACC for the 1992 season.

Two years after winning 10 games, Syracuse (1-8, 1-7) has lost six straight games since beating Georgia Tech on Sept. 26. The last was a 30-0 loss at Louisville while finishing with 137 yards and seven first downs. The Orange are a roughly two-touchdown underdog entering Saturday’s visit from North Carolina State (6-3, 5-3), which handed then-No. 21 Liberty its first loss last weekend but lost in the Wolfpack’s last trip north in 2018.

Boston College quarterback Phil Jurkovec is putting up strong numbers entering Saturday’s visit from Louisville. The Notre Dame transfer has thrown for 2,355 yards in his first nine starts, the most by a BC quarterback in program history. That’s also ninth in the Bowl Subdivision ranks this season, while the redshirt sophomore has one interception in his last four games.