No. 4 Georgia to lean on tough defense while finding new QB 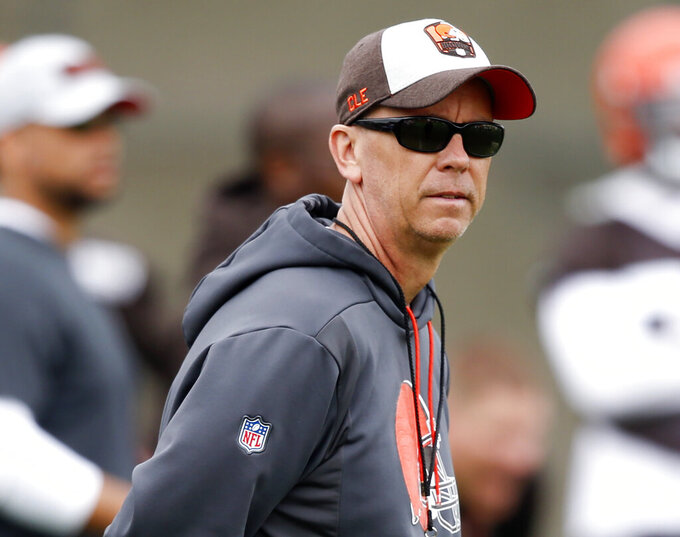 FILE - In this May 22, 2019, file photo, Cleveland Browns offensive coordinator Todd Monken watches a drill during an NFL football organized team activity session at the team's training facility in Berea, Ohio. There will be much interest in possible changes coming to No. 4 Georgia’s offense with a new quarterback, who is expected to be Wake Forest transfer Jamie Newman, and a new coordinator, Monken. Still, coach Kirby Smart’s Bulldogs may lean on their experienced defense in the pandemic-delayed season. (AP Photo/Ron Schwane, File)

Kirby Smart's concerns about No. 4 Georgia being behind schedule are easy to understand.

The Georgia coach is working to rebuild his offense after the coronavirus pandemic wiped out spring practice.

Smart is trying to find a new quarterback and lead running back. He is putting together an almost all-new offensive line. Meanwhile, the Bulldogs are adjusting to first-year offensive coordinator Todd Monken.

There's also reason for much confidence. The Bulldogs return most of the nation's top scoring defense in 2019. The stout defense is expected to carry the team while the offense gains steam.

“Guys are more comfortable, playing faster,” said senior safety Richard LeCounte. "Guys are just out there flying around making plays. That’s something you have to be pleased with as an older player to know that everyone you’re playing with on defense knows the system ... and are able to play at a high level.”

Wake Forest transfer Jamie Newman is the favorite to start at quarterback, though Smart said Saturday no leader had emerged.

“I don’t have a timetable for that,” Smart said of naming a starter. “It’s got to happen.”

Another transfer, former Southern Cal starter JT Daniels, has not received full medical clearance in his recovery from a knee injury which ended his 2019 season with the Trojans. Freshman Carson Beck, D'Wan Mathis and Stetson Bennett are the other contenders.

“I don’t think we’re ready to say where the quarterbacks are in terms of the development and which guys step it up,” Smart said. "The biggest issue with the quarterbacks is the number of reps. You can’t prepare four, five or even three quarterbacks, so that makes it tough.”

Newman has dual-threat skills. That should help as Monken, who last season was the NFL Cleveland Browns' offensive coordinator, wants the quarterback to be mobile.

When asked what characteristics he is looking for in his quarterback, Monken said “Accuracy is number one.” He listed mental toughness next before adding “athleticism, the ability to move and extend plays” also is crucial.

"It’s hard to be a statue anymore and be consistently explosive and be able to move the football,” Monken said.

Georgia is not releasing any details of its coronavirus testing, including the number of positive tests. No player has opted out. Smart said he believes his players are safer while on campus than at their homes.

The Bulldogs open their season at Arkansas on Sept. 26. The Southeastern Conference's decision to play conference-only, 10-game schedules means the Bulldogs won't play state rival Georgia Tech. Highlights in the schedule include a visit from Auburn on Oct. 3 and a game at Alabama on Oct. 17.

George Pickens, Demetris Robertson and Kearis Jackson are expected to be the top threats at receiver.