No. 7 Iowa, No. 19 Illinois to end long layoffs with faceoff 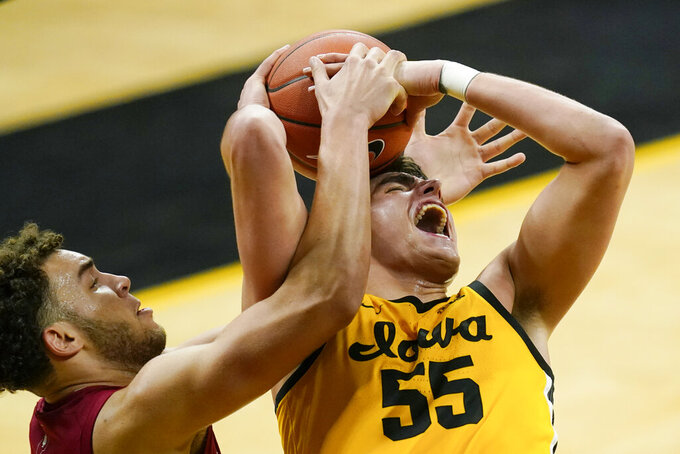 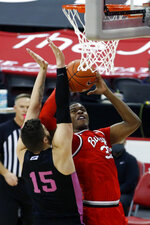 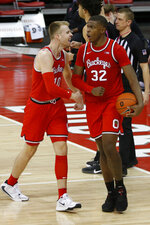 GAME OF THE WEEKEND: No. 7 Iowa (12-3, 6-2 Big Ten) at No. 19 Illinois (10-5, 6-3), Friday: Both teams will be playing their first games in over a week after Illinois’ scheduled matchup with Michigan State and Iowa’s planned matchup with Nebraska were postponed. Iowa is attempting to bounce back from an 81-69 loss to Indiana in its last outing back on Jan. 21. Illinois won its last game 79-65 over Penn State on Jan. 19 but had lost two straight before that.

LOOKING AHEAD: No. 4 Michigan (13-1, 8-1) leads the Big Ten standings, but the school has paused all athletic events for the time being after several positive tests for a new COVID-19 variant that transmits at a higher rate. In the meantime, the next several days could determine which of the Big Ten’s other teams could emerge as the Wolverines’ biggest challenger for the league title, assuming Michigan returns to action later this season. The other Big Ten teams in the Top 25 include Iowa, No. 13 Ohio State, No. 14 Wisconsin, Illinois and No. 21 Minnesota.

INSIDE THE NUMBERS: Rutgers’ 74-70 victory at Indiana on Sunday marked the first time the Scarlet Knight have won at Assembly Hall, though Rutgers is now 4-1 in its last five matchups with Indiana. This is the first time Rutgers has won four of five against a Big Ten opponent since joining the league in 2014-15. … Michigan State will be playing its first game in 20 days when it visits Rutgers on Thursday. The layoff was caused by COVID-19 issues within the program. … Illinois’ Kofi Cockburn has recorded a double-double in six straight games. … Ohio State has beaten a team ranked 15th or higher in each of its last three road games.

ON THE WOMEN’S SIDE: No. 14 Ohio State has knocked off teams ranked 11th or higher in its last two games. This marks the first time since February 2006 that the Buckeyes have won back-to-back games against Top 15 teams. Ohio State won 81-77 on Thursday over then-No. 11 Michigan – which is now ranked 12th - and followed that up with an 88-86 triumph over No. 7 Maryland. Naz Hillmon had a school-record 50 points as well as 16 rebounds for Michigan in the loss to Ohio State. Maryland’s loss to Ohio State caused the Terrapins (11-2, 7-1) to fall into a tie with No. 16 Indiana (9-3, 7-1) for the Big Ten lead. Other teams with only one conference loss are Michigan (10-1, 5-1) and Ohio State (9-1, 5-1). The Michigan women’s team is on a hiatus along with its men’s program and the rest of the school’s athletic department.