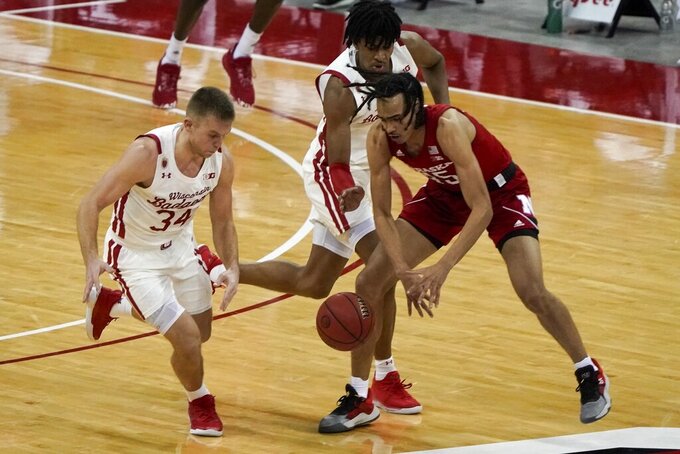 Wisconsin's Brad Davison and Nebraska's Dalano Banton go after a loose ball during the second half of an NCAA college basketball game Tuesday, Dec. 22, 2020, in Madison, Wis. (AP Photo/Morry Gash) 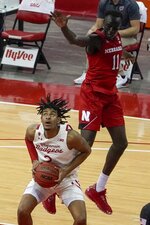 MADISON, Wis. (AP) — Struggling mightily to sink a jump shot, Wisconsin never stopped playing well on the other end of the floor.

That approach helped the ninth-ranked Badgers overcome an ice-cold start to beat Nebraska 67-53 on Tuesday in the Big Ten opener for both teams.

“They want to be the best defensive team in the country,” Wisconsin coach Greg Gard said.

They needed to be great on defense to make up for their inability to make shots.

Wisconsin (7-1) was coming off an 85-48 blowout of Louisville — then ranked 23rd — for the Badgers’ most lopsided victory over a Top 25 team in program history. But the team that looked so dominant Saturday afternoon faced an early double-digit deficit against Nebraska.

The Badgers missed 15 of their first 16 shots from the floor, went nearly eight minutes without a basket and scored just three points in the first 11-plus minutes of the game.

Yet they never trailed by more than 10 as their defense kept them in the game. Midway through the first half, Nebraska led 7-3.

“Obviously we were struggling to get the ball in the hoop, but our defense saved us in that first half, kept the game close and put us in striking range there for when we could get it going,” said Brad Davison, who had 15 points and a career-high seven assists.

“Especially with us being a higher ranked team and the expectations we have, we’ve got a target on our back,” Davison said. “So we’ve got to come ready to play, and we’ve got to tough and grit those games out where maybe the ball’s not going in at the rate that we’d like.”

Wisconsin made just 40% of its shots against Nebraska after shooting 54.4% overall and 16 of 25 from 3-point range against Louisville. But the Huskers were even less accurate, as they made only one-third of their attempts.

“To go on the road against the No. 9 team in the country and hold them to 40% shooting after what they did in their last game against Louisville was something we can build on,” Nebraska coach Fred Hoiberg said. “There's no doubt about it.”

During that spurt, Potter scored seven points and assisted on 3-pointers by Trevor Anderson and Davison.

Nebraska: Two nights after Northwestern surprised Michigan State 79-65, Nebraska seemed intent on producing an equally stunning result before Wisconsin pulled away. It didn’t help that leading scorer Allen was called for three fouls in the first half. Allen played 25 minutes before fouling out.

Wisconsin: The Badgers won’t be able to afford these types of slow starts against most Big Ten teams. Tuesday’s game showed how Wisconsin can be vulnerable if it’s not hitting from outside. The Badgers shot 33 of 65 from 3-point range in two regular-season victories over Nebraska last year. They missed 10 of their first 11 attempts from beyond the arc Tuesday before finishing 8 of 26.

This type of performance isn't likely to impress Top 25 voters, but it will be forgotten if the Badgers beat Michigan State on Christmas Day.

Nebraska hosts No. 19 Michigan on Friday.