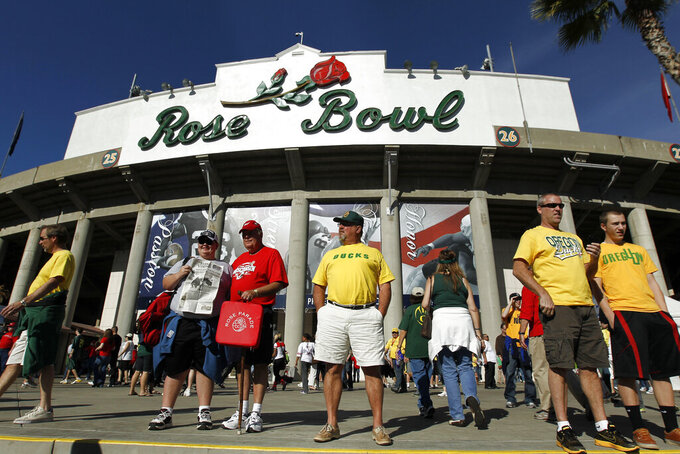 FILE - In this Jan. 2, 2012, file photo, Wisconsin and Oregon fans arrive for the Rose Bowl NCAA college football game in Pasadena, Calif. No spectators will be allowed at the Rose Bowl for the College Football Playoff semifinal on Jan. 1 because of COVID-19 restrictions imposed by the state, county and city of Pasadena, The Tournament of Roses said Thursday, Dec. 3, 2020. (AP Photo/Matt Sayles, File)

PASADENA, Calif. (AP) — No spectators will be allowed at the Rose Bowl for the College Football Playoff semifinal on Jan. 1 because of COVID-19 restrictions imposed by the state, county and city of Pasadena.

The Tournament of Roses said Thursday that it requested special permission to allow for a limited number of spectators or a select number of guests of players and coaches at the 90,888-seat stadium but was denied.

Los Angeles County is under a stay-home order that took effect this week and runs through mid-December. Pasadena has its own public health department and can set its own rules, but has mostly followed the county's lead during the coronavirus pandemic.

“While we are disappointed that the Rose Bowl Game will not be played in front of spectators, we are pleased that we are still able to hold the game this year, continuing the 100-year plus tradition of The Granddaddy of Them All,” said David Eads, executive director and CEO of the Tournament of Roses. “We continue to work closely with health department officials and the Rose Bowl Stadium to provide the safest possible environment for our game participants.”

The Rose Bowl is hosting one of the playoff semifinals; the other is at the Sugar Bowl in New Orleans. The CFP selection committee will set the pairings for the semifinals on Dec. 20. The national championship game is set for Jan. 11 at Hard Rock Stadium in Miami Gardens, Florida.

The Fiesta Bowl also announced Thursday that no fans would be allowed at the Jan. 2 game in Glendale, Arizona, though the immediate families of players will be able to attend.

The first Rose Bowl was played on Jan. 1, 1902, beginning the tradition of postseason college football games. In 1942, the game was moved to North Carolina because of fears of an attack by Japan on the U.S. West Coast after the attack on Pearl Harbor.

The Rose Parade, traditionally held the morning of the game, is off, too. It had previously been canceled only during World War II.