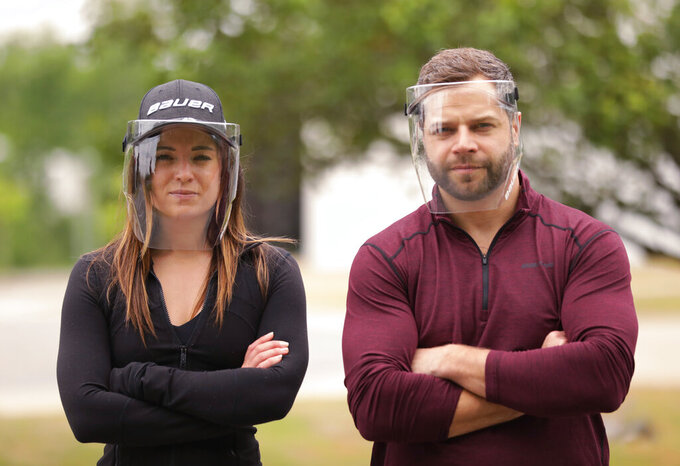 In a photo provided by Bauer Hockey, a Bauer employee, right, and a friend of the employee pose for a photo wearing Bauer's full face shields June 6, 2016, in Exeter, N.H. Because NHL players are expected to be tested daily, there isn’t expected to be additional on-ice equipment required for practices and games. Deputy Commissioner Bill Daly additionally said he didn't anticipate any mandatory equipment changes to ensure player safety. Still, hockey equipment manufacturer Bauer has spoken with the league and teams about off-ice visors that coaches, executives, team personnel and others could wear as a measure of protection against spreading or contracting COVID-19. (Bauer Hockey via AP) 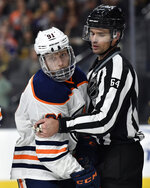 NHL players won’t be expected to wear full face shields if games resume this summer, though there could be plenty of covered faces around them.

Equipment changes have not been a focus of return-to-play negotiations between the league and players’ union, according to a person with knowledge of those talks. The person, who spoke to The Associated Press on condition of anonymity because no agreement has been reached, said the emphasis has been on testing and other off-ice safety precautions.

Because players are expected to be tested daily, there isn’t expected to be additional on-ice equipment required for practices and games. Deputy Commissioner Bill Daly additionally said he didn't anticipate any mandatory equipment changes to ensure player safety.

Still, hockey equipment manufacturer Bauer has spoken with the league and teams about medical-grade off-ice visors that coaches, executives, team personnel and others could wear as a measure of protection against spreading or contracting COVID-19. Product vice president Craig Desjardins said the visor, which can attach to the brim of a baseball cap, is "feather light" despite being three times thicker than a medical shield and meeting the American National Standards Institute regulation for preventing droplets.

“There’s been a lot of interest,” Bauer vice president of global marketing Mary-Kay Messier said. “Craig and I have actually had a lot of calls with NHL teams as they consider how to bring back their teams — their entire teams and everyone that surrounds them — safely, particularly in situations where they’re looking at being hub cities where there’ll be a lot of interaction.”

Ten locations are in the running to serve as the “hub” cities that will host 24 playoff teams for initial rounds, Eastern and Western Conference finals and Stanley Cup Final. Players are expected to be quarantined away from the general public in those cities.

Each team is limited to 50 personnel in its game city, with the event level at arenas and practice facilities, hotels and restaurants expected to serve as a quarantine bubble of sorts. Bauer's “integrated cap shield” that's being unveiled Wednesday and a polyester face mask would fit for those outside the bubble and for players around the rink when they're not skating, because they're required to wear masks even now, during voluntary workouts.

Bauer, which in March shifted to making personal protective equipment for those on the front lines, is gearing its on-ice splash guard mostly to youth and amateur players and has consulted with the International Ice Hockey Federation, USA Hockey and Hockey Canada.

“We have a shared interest collectively around being able to return to play safely,” Desjardins said.

Coaches in the NHL and various other leagues could use the off-ice shield behind the bench, too.

“There’s quite a lot of yelling from coaches,” Messier said, “So when you think about and you talk about that yelling or loud talking that you are at greater risk for the droplets, I would say it is a very viable option at a lot of different levels.”

While there are heath and safety protocols in place for small-group workouts and could escalate when training camps open July 10, players have said they're unsure about wearing a full face shield or changing too much of hockey itself if the season resumes. They're focused on the outside protections that would make games safe.

“With the nature of our game, if we’re going to talk about not being able to hit each other and other things, there’s no point in playing,” Winnipeg captain Blake Wheeler said. “The challenge is going to be getting everyone into said bubble, getting everyone tested and having it be that we’re all on the same page and try to nip it in the bud before we get there."