No more positive results for Spain; squad to get vaccinated 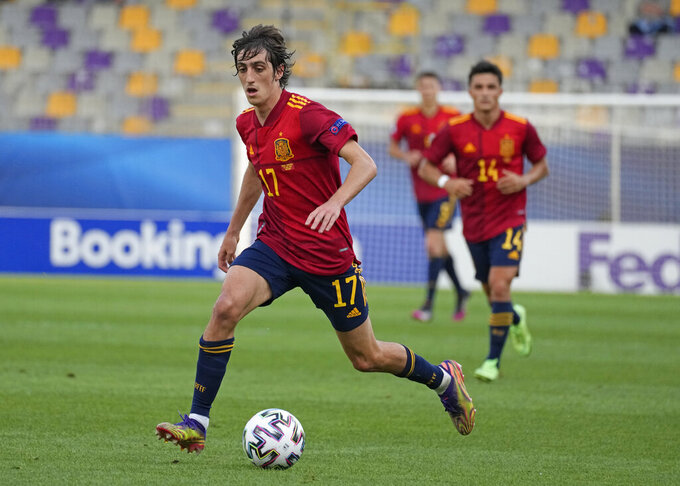 Spain's Bryan Gil runs with the ball during the Euro U21 semifinal soccer match between Spain and Portugal in Maribor, Slovenia, Thursday, June 3, 2021. (AP Photo/Darko Bandic)

MADRID (AP) — Spain celebrated another round of negative test results on Wednesday and welcomed the announcement that the squad would get vaccinated ahead of the European Championship.

The news came after “La Roja” expanded its parallel squad to 17 players following the detection of two coronavirus cases this week. Defender Diego Llorente tested positive on Tuesday and captain Sergio Busquets on Sunday. Both players left the team's training camp and were put into isolation.

Coach Luis Enrique called up 11 players from Spain's under-21 squad to join six other players who had already been training separately from the main team.

No other players have tested positive so far, the Spanish soccer federation said. All players and staff members returned negative results after undergoing tests mandated by UEFA on Wednesday. The players on the parallel squad also all tested negative.

“It's an unpleasant situation for everyone,” defender Jordi Alba, who is taking over the team's captaincy, told Radio Marca. “What happened to Busquets was unfortunate. I hope he will be back with us soon. We have been complying with all the protocols and we have to continue to adapt. Hopefully there won't be more of this going forward.”

Health Minister Carolina Darias said Spain’s armed forces would administer the shots to the players. She said the Spanish federation would provide more details on when they would receive their jabs, but confirmed that the players will need two shots, meaning the second ones likely won't be administered for a few weeks.

“We have acted in the fastest way possible and we think that it is an important decision,” Darias said, adding that her ministry received a letter from the sports minister on Friday asking for the vaccines for the soccer team.

Some in Spain have criticized the delay in getting the team vaccinated, while others have complained that the players are getting their shots ahead of other Spaniards who are still waiting. Only those over the age of 45 are currently authorized to get vaccinated in Spain.

Llorente's positive result was made public not long after Spain's under-21 squad beat Lithuania 4-0 on Tuesday night in Madrid in a match that was supposed to be played by the senior team as its final warm-up before “La Roja” opens its Euro 2020 campaign against Sweden on Monday in Seville.

All but one of the 20 players called up for that match — Bryan Gil — had played for the senior national team before. The friendly counted as a first-team match, with players getting caps and an official debut for coach Luis de la Fuente with the main squad. The last time Spain had 10 players on debut for a senior international was in 1941, against Portugal, after the team had not played since Spain’s Civil War broke out in 1936.

The Spanish federation did not say whether Busquets or Llorente would be cut from the squad.

Luis Enrique has until Saturday to make changes to his initial list in case of injuries or COVID-19 cases. He only selected 24 players instead of the 26 allowed for each national team at Euro 2020, saying he didn’t want to call up too many players who would not likely be used at the tournament.

Among those left out was veteran captain Sergio Ramos — a defender like Llorente — who had been sidelined for most of the second part of the season because of injuries and a spell with COVID-19.

Players who test positive must stay in isolation for at least 10 days, meaning both Busquets and Llorente will miss the opener against Sweden. It would also be unlikely they would be fit for Spain's second match against Poland on June 19. The team's final Group E match will be against Slovakia on June 23, also in Seville.

The Euros begin on Friday when Italy hosts Turkey.