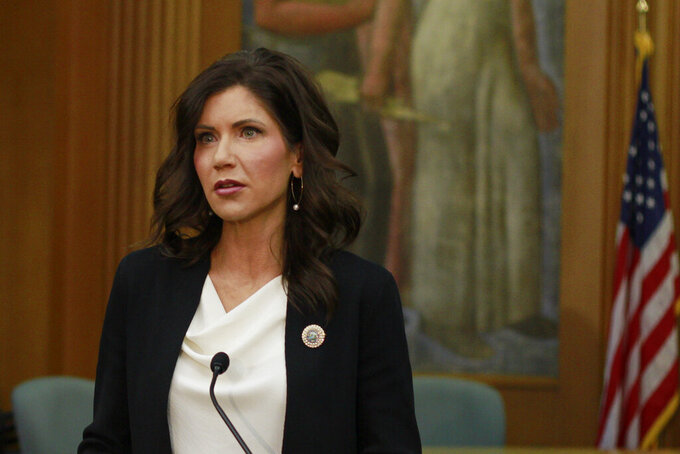 RAPID CITY, S.D. (AP) — South Dakota Gov. Kristi Noem made another stop Tuesday in Rapid City on her tour of the state to announce city and county governments will be able to access $200 million in federal funding to address the coronavirus crisis.

Rapid City Mayor Steve Allender said the city plans to have money it spent on an emergency shelter and emergency services reimbursed. He said police and emergency medics have seen their work “dominated by COVID and the effects of it."

The state has received $1.25 billion in funds from the federal government as part of a relief package for the pandemic. The Republican governor told local leaders that Rapid City would be able to access up to $17.5 million and Pennington County would get $7.5 million.

She made a similar announcement on Monday in Sioux Falls, which will be able to expense up to $41.5 million to federal funds the state has received.

The governor said the federal funds may also be used to develop a program to help businesses hurt by the economic downturn, but that it would require action from the Legislature. She said that might be considered be lawmakers at a special session in the next several months.

Noem has encouraged businesses to “innovate” rather than shutting down completely during the pandemic, a move she hopes will help the state bounce back from the pandemic.

The state has seen declining numbers of infections in the last two weeks. Health officials reported 27 new infections on Tuesday, but also two new deaths in Pennington and Minnehaha counties. One man and one woman died. One person was in their 70s, and the other was over 80.