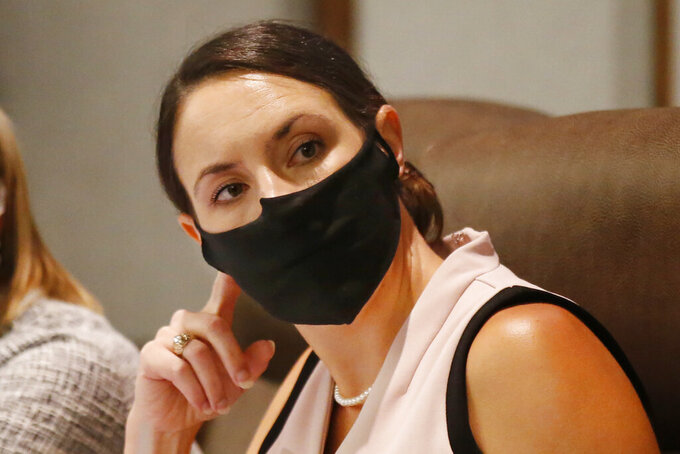 FILE - In this June 9, 2020 file photo, Norman Mayor Breea Clark listens during a city council meeting in Norman, Okla. The Norman City Council has voted to require masks be worn inside personal homes if more than 25 people are present in an effort to slow the spread of the coronavirus. The council voted 5-3 Tuesday, Sept. 23, 2020, for the ordinance that takes effect immediately and expires Nov. 30, 2020, despite objections from residents that such a requirement violates their constitutional rights. (AP Photo/Sue Ogrocki File)

OKLAHOMA CITY (AP) — The Norman City Council voted to require that masks be worn indoors at house parties if more than 25 people are present to slow the spread of the coronavirus in the college town — a step that angry residents said would infringe on their rights.

The council voted 5-3 on Tuesday night in favor of the ordinance, which took effect immediately and expires Nov. 30, despite the objections of some locals.

“You can make any law that you want to. You come into my house telling me that I got to wear this stupid thing and you're going to have a firefight on your hands,” said Josh Danforth, who identified himself as an Iraqi war veteran while holding a mask.

Resident Laura Ashford said the ordinance violates the First, Second and 10th amendments to the Constitution.

“You have no authority to command what I do in my home,” Ashford said. “It's against my constitutional rights as a citizen of the United States of America.”

Council member Kate Bierman said an increase in coronavirus cases — more than 1,000 reported cases per day statewide for each of the past seven days — and a weekend party attended by up to 400 people at a Norman apartment complex illustrate that residents aren't heeding recommendations to wear masks.

Violating the ordinance carries a fine of $50-$500 and requires at least three violations before a citation can be issued, said Mayor Breea Clark.

“We're not going to bust into people's houses to county and make sure everyone is wearing a mask,” Clark said. "We're going after the clear violations that apparently we're having trouble enforcing."

The council also cited large numbers of unmasked people who attended parties on University of Oklahoma football game days. The Oklahoma State Department of Health on Wednesday reported Wednesday that the state had recorded 80,161 confirmed cases of COVID-19 and 970 deaths since the start of the pandemic, which were increases of 1,089 cases and eight deaths from Monday. The agency said there were 12,412 active cases.

Dr. Dale Bratzler of the University of Oklahoma Medical Center said the state had seen a substantial increase in reported cases during the past week, largely in rural counties and in state prisons.

“On Monday of this week when we had 1,100 new cases reported in the state, almost 400 of those came out of a single county, Woodward County which is where they're seeing this large outbreak in the correctional facility,” Bratzler said.