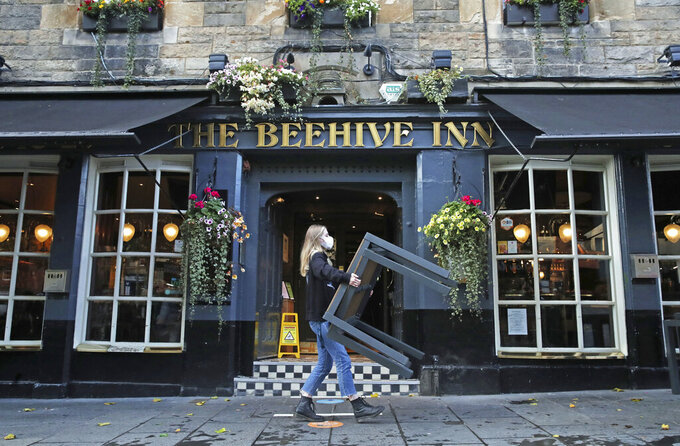 A worker removes tables from outside the Beehive Inn, as temporary restrictions announced by First Minister Nicola Sturgeon to help curb the spread of coronavirus have come into effect from 6pm, in Edinburgh, Friday, Oct. 9, 2020. (Andrew Milligan/PA via AP)

LONDON (AP) — Mayors representing big cities in northern England have slammed the British government's latest wage support package for employees in businesses that may be ordered to close as part of efforts to suppress local coronavirus outbreaks.

In a virtual press briefing Saturday, the leaders of the metropolitan areas around Liverpool, Manchester, Newcastle and Sheffield warned of the economic hardship that their regions are likely to face if and when lockdown restrictions are tightened, potentially within days.

“The north of England is staring the most dangerous winter for years right in the face,” said Andy Burnham, the mayor of Greater Manchester, a region with a population of more than 2.5 million.

While accepting the need for public health measures, the four leaders, all of whom are members of the main opposition Labour Party, vented their frustration at what they consider to be the Conservative government's top-down approach to decision-making.

Prime Minister Boris Johnson is on Monday expected to back a new three-tier local lockdown system, which could see pubs and restaurants in coronavirus hotspots in England being temporarily closed.

Johnson’s Conservatives managed to win a convincing election victory last December by appealing to traditional Labour voters across large swathes of northern England on a promise to “level-up” the country.

As elsewhere in Europe, the pandemic in the U.K. is at a crucial point, with infection levels — and deaths — rising at their fastest rate in months. Without action, there are fears that hospitals will be overwhelmed in coming weeks when they are already busy with winter-related afflictions. The U.K. has experienced Europe's deadliest outbreak with over 42,500 deaths.

Though new coronavirus infections are rising throughout England, cities in the north have seen the most acute increases. As a result, national restrictions, such as a 10 p.m, curfew on pubs and restaurants, have been supplemented by local actions, including in some cases banning contact between two households. In Scotland's two biggest cities, Glasgow and Edinburgh, the pubs have already closed for 16 days as part of measures to suppress the outbreak.

Ahead of Monday's announcement, Treasury chief Rishi Sunak outlined a new support package that will see the government pay from Nov. 1 two-thirds of the salaries of workers in companies ordered to close up to a maximum of 2,100 pounds ($2,730) a month.

That is less generous than a nationwide program that will expire at the end of October. At the height of that program, the government paid 80% of the salaries of furloughed workers, or around 30% of the working population, at a cost of nearly 40 billion pounds.

Jamie Driscoll, mayor of the metropolitan area in and around the city of Newcastle, said the new package was “unacceptable,” not least because it doesn't include workers in firms that aren't forced to close but that would still be impacted. He noted that a shuttered pub will hurt everyone from drinks suppliers through to stand-up comedians.

Steve Rotherham, the mayor of the Liverpool City Region, said he expected his area to face the highest level of restrictions from Wednesday and that he was seeking more details from the government.

“We are actually talking about lives and livelihoods," he said. "Imposing new restrictions without also providing adequate funding and support is simply not acceptable.”

Martin Greenhow, who owns the MOJO chain of five bars in northern cities, described the words of northern leaders as a “breath of fresh air."

“Help us or let us serve," he urged the government. "Don’t let us drown.”