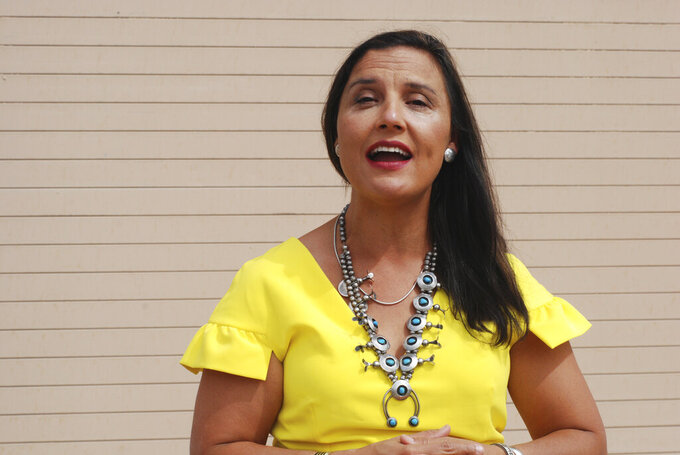 Democrats have monopolized the northern 3rd Congressional District since its creation in 1983 with the exception of one special election.

“After 30 years of failed leadership, it's time for a change,” Johnson said in a remote debate from separate locations. She criticized Democrats of failing to substantially expand infrastructure for water and broadband internet.

Johnson, an environmental engineer for oilfield clients, cast herself as a pragmatist on wildfire prevention, through better management of forests and dead wood, and on energy policies that don't abandon fossil fuels. President Donald Trump has attributed catastrophic wildfires on the West Coast to poor forest management alone.

“My approach is a balanced, sensible approach,” Johnson said. “She (Leger Fernandez) promotes the Green New Deal. ... You’re going to fuel New Mexico by only solar panels and only wind turbines. That is an extreme policy.”

Fernandez Leger warned that if New Mexico ignores climate change “the pain we will feel will be drastic.” She defended her support for the Green New Deal as a concept for promoting investments in clean-energy infrastructure.

“What that says is that while we are attacking our climate crisis, let’s also make sure that we invest in those communities that have helped power us, which means that we’re going to invest in Farmington,” Leger Fernandez said, alluding to the phase-out of coal-fired power plants in the northwest of the state.

Leger Fernandez accused her opponent of being invested in the future of the oil industry through a family business, which Johnson angrily refuted and said the business promotes “wastewater recycling” and geothermal energy.

On health care access, Johnson said she would focus her energies in Congress on increasing transparency in medical billing, reducing prescription drug prices and lowering insurance premiums for the middle class.

Leger Fernandez warned that health care consumer protections are under threat from Republican efforts to overturn the Affordable Care Act.

Leger Fernandez outlined her support for moving the country away from an employer-based health care system toward a single-payer insurance model run by the government.

“I do believe that there is a big difference in terms of what we are suggesting here,” Leger Fernandez said. “Democrats and myself, we are talking about making sure that health care is available to all. We are talking about maintaining the Affordable Care Act while the Republicans are trying to get rid of it.”

The winner in November will become the first woman to hold the seat, which has been a political stepping stone for prominent Democrats including former Gov. Bill Richardson.

Johnson secured the GOP nomination with an unconventional campaign that emphasized both her Hispanic and indigenous family roots and her status as a political outsider.

In a recent PBS interview, Johnson said she voted in 2016 for Libertarian presidential candidate Gary Johnson and that she is inspired by the activist energy of liberal firebrands such as Congresswoman Alexandria Ocasio Cortez and recently deceased U.S. Supreme Court Justice Ruth Bader Ginsburg, though she disagrees philosophically.

At the same time, Johnson is running on an outspoken anti-abortion platform. She was cited by police for not wearing a face mask in public on the central plaza of Santa Fe in July, but says her thinking has evolved and she now abides by the statewide health requirement.

Leger Fernandez's campaign is backed by a long list of advocacy groups for progressive causes and greater Latina representation in Congress, and gained early political endorsements from U.S. Rep. Debra Haaland of Albuquerque and U.S. Sen. Elizabeth Warren, who ran for president.

The coronavirus pandemic has rampaged across swaths of the 3rd District that overlap the Navajo Nation, highlighting the vulnerability of households that go without full indoor plumbing or electricity.

“Why don’t we have water or electricity in Navajo Nation,” Johnson said. “Ben Ray Luján hasn’t delivered, he endorsed my opponent and it’s going to be the status quo.”