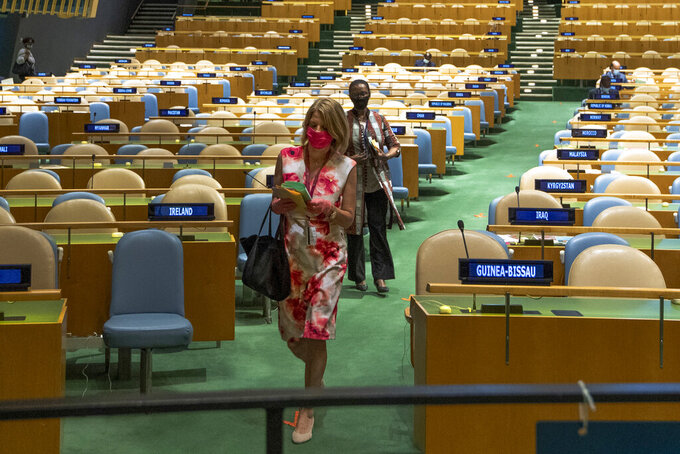 Norway's ambassador to the United Nations, Mona Juul, prepares to cast a vote during U.N. elections, Wednesday, June 17, 2020, at U.N. headquarters in New York. Norway and Ireland won contested seats on the powerful U.N. Security Council Wednesday in a series of U.N. elections held under dramatically different voting procedures because of the COVID-19 pandemic. (Eskinder Debebe/UN Photo via AP)

UNITED NATIONS (AP) — Norway and Ireland won contested seats on the powerful U.N. Security Council Wednesday in a series of U.N. elections held under dramatically different voting procedures because of the COVID-19 pandemic.

In the most closely watched race, Canada lost out to the two European countries for two Western seats on the 15-member council. It was Canada’s second consecutive defeat in a bid for a seat and a blow to Canadian Prime Minister Justin Trudeau.

In the other contested race, neither Kenya nor Djibouti received the required two-thirds majority in voting in the 193-member General Assembly and Assembly President Tijjani Muhammad-Bande announced that a second ballot will be held on Thursday.

In previous years, ambassadors from all U.N. member states have gathered in its vast chamber to vote by secret ballot, but the COVID-19 pandemic forced the world body to adopt new rules.

While the U.N. headquarters complex overlooking New York’s East River remains open for essential workers, Secretary-General Antonio Guterres has ordered staff to work from home until July 31 because of the pandemic.

On Wednesday morning the new rules went into operation — a few ambassadors arriving at the assembly during spaced-out time slots to avoid a large gathering and ensure social distancing.

And instead of voting separately for the next General Assembly president, five new members of the Security Council and 18 new members of the Economic and Social Council, the three elections were held at the same time by secret ballot.

Each arriving ambassador wore a mask, presented a voting card to a U.N. staff member, received three different colored paper ballots in an envelope, and went up an escalator into the nearly empty chamber where Assembly president Muhammad-Bande presided over the elections.

Among the early voters were U.S. Ambassador Kelly Craft and the ambassadors of Poland and Turkey. Each sat in a spaced-out seat behind the nameplate of their country, marked their ballots, and then walked to the front of the chamber to deposit them in three color-coded, separate boxes.

Because of its powers including authorizing war and imposing sanctions, winning a seat on the Security Council is considered a pinnacle of achievement for many countries. It gives them a strong voice on issues of international peace and security ranging from conflicts in Syria, Yemen, Libya, Africa and Ukraine to the nuclear threat posed by North Korea and Iran, and attacks by extremist groups such as the Islamic State and al-Qaida.

Before COVID-19, countries running for Security Council seats often invited ambassadors for lavish visits to their nations, put on dinners and held receptions with entertainments, and sent senior government officials around the globe lobbying for votes. But the pandemic has curtailed all of that since March.

The council has five permanent members — the United States, Russia, China, Britain and France — and 10 members elected by the General Assembly for two-year terms, with seats allocated to regional groups and five new members elected every year.

Norway’s Prime Minister Erna Solberg said her country would use its experience from many years of engaging in peace and reconciliation efforts “to build bridges and seek solutions to the seemingly intractable conflicts that appear on the Security Council’s agenda.”

“The world needs more international cooperation to promote peace and security,” she said.

Speaking in Dublin, Ireland’s Prime Minister said its victory “underpins Ireland’s place in the world as a global island, with a clear and tangible ambition to play a central role in contributing to international peace and security.”

In Mexico, Jesús Ramirez, spokesman for President Andrés Manuel López Obrador, wrote in his Twitter account: “We will honor the internationalist tradition of our nation to work for peace and security in the world.”

India’s U.N. Ambassador T.S. Tirumurti said the country “will become a member of the Security Council at a critical juncture and we are confident that in the COVID and in pot-COVID world India will continue to provide leadership and a new orientation for a reformed multilateral system.”

Canadian Foreign Minister François-Philippe Champagne declined to say why he thought Canada lost, adding there will be ample time for lessons learned. He said he was proud of Canada’s four-year campaign which allowed the country “to renew and strengthen many of our bilateral relations.”

The election will put two women ambassadors on the council — Norway’s Mona Juul and Ireland’s Geraldine Byrne Nason — in addition to the ambassadors from the U.S. and St. Vincent and the Grenadines.

France’s U.N. Ambassador Nicolas de Riviere told a group of reporters four women is better than two and he would prefer more.

“You have two big players coming in, India and Mexico,” he said, “and it’s sometimes pretty good for the council to have strong and big and active members because it makes the council stronger.”

In the other elections, Volkan Bozkir of Turkey was elected president of the 75th session of the General Assembly which begins in September. The post rotates annually by region and he was the candidate of the Western Europe and other states group. Greece, Cyprus and Armenia asked for a vote rather than electing him by consensus.

The 18 candidates for seats in the Economic and Social Council all ran unopposed and were elected.

Rob Gillies contributed to this report from Toronto